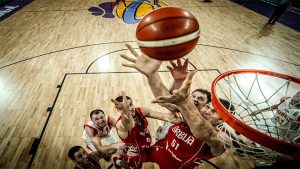 Having rolled over Spain in the 2017 Eurobasket semis, Slovenia will be looking to clinch their first ever title at major tournaments when they face Serbia in Sinan Erden Dome on Sunday evening. The Serbs proved their worth in an 87-79 win over Russia, but they will have a much bigger fish to fry against Slovenia.

Against all odds, Slovenia hammered tournament favourites Spain in the semis of the 2017 Eurobasket. NBA superstar Goran Dragic scored 15 points in the 92-72 crushing of La Roja and all eyes will be on him when Slovenia face Serbia in the title game on Sunday. Real Madrid rising star Luka Doncic has been producing terrific performances at the showpiece tournament as well and it has to be noted that he was flirting with a triple double in the triumph over Spain (11 pts, 8 ast, 12 reb). Coach Igor Kokoskov is doing a fantastic job with the Slovenian national team, but the fact that they have yet to win a trophy at major tournaments could prove to be a big problem for Goran Dragic and Co. in Sunday’s final against Serbia. Anyhow, you should bear in mind that the Slovenians have yet to suffer a loss at the 2017 Eurobasket.

Coach Igor Kokoskov has no fresh injury worries ahead of Sunday’s clash against Serbia and he is unlikely to make changes to the starting line-up.

Bogdan is the man!

Despite the fact that Serbia coach Aleksandar Djordjevic can’t count on the likes of Milos Teodosic, Miroslav Raduljica, Nikola Jokic, Nemanja Bjelica and Nikola Kalinic for the 2017 European Championship, Serbia have been producing splendid displays at the tournament. Fenerbahce ace Bogdan Bogdanovic is undisputedly the leader of the team and the former Partizan man scored 24 points in an 87-79 win over Russia in the 2017 Eurobasket semis. Giant Boban Marjanovic plays a very important role in Aleksandar Djordjevic’s team and he could be the key to Serbia’s success in the title game. Serbia are eyeing their first European Championship title as an independent country, but beating the high-flying Slovenians is easier said than done. Serbia played their last Eurobasket final in 2009, with the team suffering a heavy 85-63 loss to Spain and, no doubt, the Eagles are hungry for success. Aforementioned shooting guard Bogdan Bogdanovic, who has been averaging 20.3 points at the tournament, will be the man to watch in the away team.

Branko Lazic remains in the recovery room, while Luka Jovic, who suffered an ankle injury against Russia, is a major doubt and he will be assessed on the match day.

Slovenia and Serbia, the two former Yugoslav republics, seem to be evenly matched ahead of Sunday’s final and a close encounter appears on the cards. However, given the experience of Serbian players, we are tempted to put our money on Aleksandar Djordjevic’s men, who have been impressive defensively at the 2017 Eurobasket.