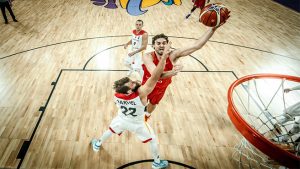 All eyes will be on Sinan Erdem Dome when Spain and Slovenia face each other in the 2017 European Championship semis. La Roja are eager to defend their trophy, but beating the high-flying Slovenians is easier said than done.

As expected, Spain defeated Germany in the quarter-finals of the 2017 European Championship, with Gasol brothers proving their worth in the 84-72 triumph over Chris Fleming’s troops. Marc and Pau scored 47 points between each other in Tuesday’s clash and the duo is likely to pose a big threat for Slovenians in the semis of the showpiece tournament. Veteran Juan Carlos Navarro is no longer sharp as he used to be in the past, but young guns Sastre, Rubio and Hernangomez brothers are playing important roles in Sergio Scariolo’s team. La Roja are eyeing their eighth consecutive win at the 2017 Eurobasket, but it has to be noted that their performance in the victory over Germany was anything but impressive. The reigning champions will have to be at their sharpest in the semis if they are to make it to the title game and, given the experience of Sergio Scariolo’s men, a home win should be considered.

The likes of Serge Ibaka and Nikola Mirotic were both left out of the team, whilst Sergio Llull misses the tournament with an injury. Coach Sergio Scariolo has no fresh injury worries.

Slovenia have been producing splendid performances at the 2017 European Championship and it is more than obvious that they are determined to win their first ever major trophy. Igor Kokosov is doing a great job with the Slovenian national team and his men impressed in a 103-97 triumph over Latvia in the quarter-finals of the tournament. Goran Dragic scored 26 points in the victory over the Baltic side and the NBA star will be the man to watch in Igor Kokoskov’s team in Thursday’sshowdown against star-studded Spain. Slovenia did score 103 points in the quarterfinals against Latvia, but they will have a much bigger fish to fry in the semis against the title holders. The Slovenians defeated Spain at the 2013 European Championship 78-68 and that is giving fans a reason for optimism ahead of the Sinan Erdem Dome game. Real Madrid starlet Luka Doncic is enjoying a very successful tournament and, no doubt, the Spaniards should have the 18-year-old shooting guard at bay.

Coach Igor Kokoskov has no selection worries ahead of the Spain game and he is unlikely to make changes to the starting line-up. Goran Dragic did not travel with the squad.

Spain are undisputedly the best team at the 2017 European Championship, but they failed to impress in the quarter-finals and that is the main reason why I believe Slovenia, who were making shots for fun against Latvia, are going to cover the handicap. Taking everything into account, a close encounter appears on the cards.