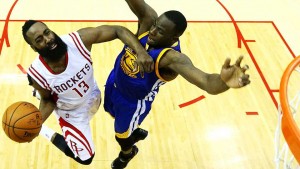 All eyes will be on Toyota Center when Houston Rockets and Golden State Warriors face each other on Tuesdayevening. Both teams have been in a splendid form of late and a lively contest appears on the cards.

Houston Rockets quickly bounced back from a 128-112 defeat to New Orleans Pelicans. Mike D’Antoni’s men managed to get their revenge on Pelicans, with the team beating the likes of Denver Nuggets (twice) and Oklahoma City Thunder in previous four league games as well. Rockets cemented third position in the Western Conference and, as things stand now, they will face Oklahoma in the play-offs. However, there are still nine games to go before the end of the regular season and Houston will have to be at their sharpest in upcoming matches if they are to clinch third position in the standings. James Harden scored “only” 22 points in the 137-125 victory over Thunder on Sunday, but it has to be noted that the “Beard” suffered a wrist injury during the game. Harden, though, should recover in time to face Golden State Warriors and he will be the man to watch in the home team.
James Harden intents to play against Golden State Warriors, whilst Ryan Anderson is definitely out of contention with an ankle injury. Coach Mike D’Antoni, though, has no other injury worries.

Thanks to a 106-94 victory over Memphis Grizzlies moved one step closer to clinching top position in the Western Conference. The last season’s runners-up have recorded two victories more than second-placed San Antonio Spurs, who are breathing down their neck. Top scorer Kevin Durant remains in the recovery room, but Warriors have been producing scintillating performances of late and they are on a seven-game winning run ahead of the trip to Texas. Klay Thompson scored 31 points in the triumph over Grizzlies, whilst fellow “Splash Brother” Stephen Curry added 21 points and 11 assists. All eyes will be on the duo when Houston Rockets and Golden State Warriors face each other at Toyota Center, but the visitors will have to be on top of their game on Tuesday evening if they are to extending their winning run in NBA. In their last meeting in Houston Warriors emerged triumphant, but it has to be noted that Kevin Durant led Steve Kerr’s troops to the victory with 32 points.
Kevin Durant has yet to recover from a knee injury, but he could be back on the court in mid-April. Steve Kerr has no other selection worries ahead of Tuesday’s clash.

As previously mentioned, both Houston Rockets and Golden State Warriors are in great form and Tuesday’sgame is of big importance for both teams. Considering that 492 points in total were scored in previous two meetings between Rockets and Warriors, a high-scoring affair appears on the horizon.