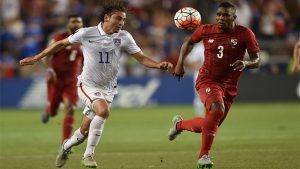 All eyes will be on Levi’s Stadium in Santa Clara when The United States and Jamaica face each other in the 2017 Gold Cup final. The two teams meet in the final of the CONCACAF championship for the first time ever and it remains to be seen if the Yanks are going to regain the trophy.

The United States of America did not make a flying start to their Gold Cup campaign, with the team dropping two points in a 1-1 draw with Panama in their opener. Yanks, though, quickly got back on course and thanks to four consecutive wins they made it to the 2017 Gold Cup final. The USA have been impressive at the back in the knockout stages of the tournament and it has to be noted that the hosts are eyeing their fourth straight clean sheet. Coach Bruce Arena will count on his star players for the title game and FC Toronto attacker Jozy Altidore, who scored in a 2-0 win over Costa Rica in the semis, is likely to prove a handful for the opposition defenders in Thursday’s showdown.

Coach Bruce Arena is unlikely to make too many changes to the team that outplayed Costa Rica (2-0). Jordan Morris is widely expected to be deployed up front, alongside aforementioned attacker Jozy Altidore. Clint Dempsey and Michael Bradley should start as well.

A win for the history

Despite being considered big underdogs in the Gold Cup semi-final against Mexico, the Reggae Boyz did remarkably well to spoil El Tri’s party at Rose Bowl. Kemar Lawrence scored a late winner for Jamaica in the semis and the 24-year-old defender and his teammates are now on a quest to win their first ever Gold Cup trophy. Theodore Whitmore’s men were beaten by Mexico in the final of the 2015 tournament and the lack of confidence could prove to be the biggest problem for the Reggae Boyz in Thursday’s match against the United States of America. However, the fact that Jamaica defeated the USA at the 2015 Gold Cup is certainly giving fans a reason for optimism ahead of the title game. Theodore Whitmore’s team are likely to adopt a defence-minded approach in the final, but preventing the USA stars from scoring in the Levi’s Stadium clash is easier said than done.

Coach Theodore Whitmore is likely to field the same starting XI that faced Mexico and he should stick to the 4-4-2 formation. Ricardo Morris is pushing for a start.

The United States of America have been producing scintillating performances in the knockout stages of the 2017 Gold Cup and considering that they are determined to regain the trophy, I believe that there is a big value in betting on the tournament hosts. Jamaica scored a late winner in the semis against Mexico, but they are unlikely to shock Bruce Arena’s charges at Levi’s Stadium.