Opinion Addition of Bitcoin to the Card Collecting Games 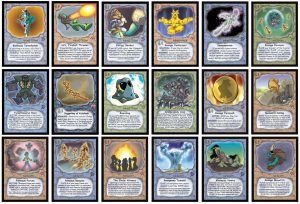 In the gaming industry, card collecting games hold a very important place. For more than two decades, they were are a multi-million dollar business that spans the globe and includes countless players of all types. Additionally, it is important to note that the business had successfully digitalized itself at one point and transformed its focus from physical cards to virtual ones.

This was achieved partly thanks to the openness of most players to technological advances, but on the other hand, the thing that also helped was the flexibility of the leaders in the companies behind the most successful franchises.

Now, it appears that the same level of flexibility will present itself once again. This time, the focal point will also be in the digital domain, but now it will cover the concept of using blockchain digital currency like bitcoin as the basis for the trading of cards. While the process might be demanding in many ways, especially when it comes to QA, the potential end results could make it up for it.

Here are some of the issues facing the developers of these games, but also the context of the same gaming genre across the recent decades.

The idea of using bitcoin in the realm of gaming is nothing new. From a diverse range of ideas, there is also the fact that bitcoin remains one of the handful of currencies of choice in gaming eSports tournaments and online competition, thanks to its ease of use and simplified, instantaneous transactions. For the gaming crowd, any cryptocurrency is a natural fit and the adoption remains high in the same population.

But, the process of actually implementing bitcoin in a game remained something on the relative fringe of the industry. Today, there are plenty of games that aim to bring players in with the promise of profit in BTC but do this on a really shallow level, often presenting actual games that were completed on a shoestring budget. These games basically desire to capitalize on the appeal of bitcoin, especially to the younger players who are willing to exchange their abundant free time for a chance to earn something in the monetary domain.

However, most of these games come with very problematic setups where the actual payouts are rare and exceedingly low. Unlike using BTC to bet online, which is now a very established branch of the gambling business, games like the mentioned ones come from an unknown developer and provide very little reassurance when it comes to a transparent and balanced system that would provide players of their game with profits in bitcoin. But, these are just those examples that cover games which have already found their way to the market.

But, in the meantime, a range of developers in the card collecting and card trading fields are working diligently on their alternative for incorporation of bitcoin in their gaming worlds. These have a lot better chance to succeed in applying BTC in a way that would really employ both the pontifical for earning money through gaming and other valuable features of blockchain technology.

History of the Card Games

The history of card games is so long that it spans most of the organized human civilization, reaching back to the times of the ancient cultures of the Mediterranean, even though the first recorded use of the paper card game begins in the 9th century China. But, there was and still is something very intrinsic about the appeal of card games which is why they remain to be as popular as ever.

Card collecting and trading games managed to take the same idea even further. Unlike the traditional games where the number and form of cards were shared among the players completely, collecting games arose from the idea of collecting each player’s deck as a personal possession that was both a collection of valuables and a tool for playing the game. Obviously, the advantages of the same product from a business perspective were incredible mainly based on the fact that the users would continue to purchase card packs and try with them to build better and better decks.

The gaming and publishing industry felt out the same potential in the 1980’s, first and foremost through a strong association with the AD&D franchises. But, the game concept really took off with the launch of the Magic: The Gathering franchise that was so popular in the middle years of the 1990’s that it generated unbelievable profits. In the decades the followed, several hugely successful digital adaptations of the card trading concept, which includes Blizzard’s Hearthstone converted the players to the digital platforms, which now cover both computers and mobile devices.

Currently, several high-profile startups are crafting their own card collecting games that will operate using a blockchain system. These games include Book of Orbs, Spells of Genesis and Augmentors. In them, tokens based on the blockchain are used to define the crafted cards and follow them across the network. By using the same tech, the games attain a level of accessibility where the ownership of the in-game digital assets can be easily verified and tracked.

The process of tracking and verifying already works in a range of different setups. Employing it for the games like these ones should not provide a big issue for the developers.

The additional factor related to the Augmentors game is the fact that also bases itself on augmented reality, where actual physical objects would be used to create in-game resources. But once the resources are created, they are stored in the game’s blockchain and shared among all of the gamers.

Naturally, the idea is that the trading of the cards also gets connected to bitcoin, providing an easily accessible marketplace. A game operator in this environment that attains a certain level of player acquisition could produce a whole lot more money than any other free to play game operating roughly the same number of users.

But, the road ahead is not paved completely. Blockchain tech uses like these have to be rigorously tested and left with an infinite ability to scale up. On many occasions in the IT domain, these two factors alone proved to be a handful even for the biggest companies.

In spite of the hurdles, the allure of the potential profit remains strong; this is why it is only a question of time before users begin to trade their cards using BTC in one of these games.