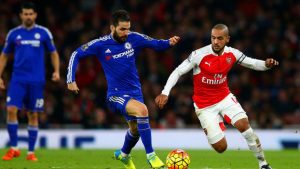 All eyes will be on Emirates Stadium when Arsenal and Chelsea face each other in the London derby. The Blues aim to build on back-to-back wins over the likes of Brighton and Stoke City, but beating the Gunners away from home is easier said than done.

Yet another turbulent season

Arsenal chiefs still have faith in coach Arsene Wenger, but the Gunners continue to struggle in the Premier League. Arsenal finished the 2016/2017 season in 5th place in the standings and, as a result, they represent England in the Europa League this term. The Gunners are six points behind the Champions League berth ahead of their first game of the year and they are likely to stick to their attacking style of play against Chelsea. Arsene Wenger’s men were on the verge of beating West Bromwich Albion at the Hawthorns in their last league fixture, but the Baggies eventually scored a late equalizer from the penalty spot. The good news for the fans is that key player Alexis Sanchez has found his goal-scoring touch and the Chile international is likely to pose a big threat for Chelsea defenders in Wednesday’s London derby.

Blues impressive at the back

Despite producing fine performances in the Premier League this season, Chelsea have slim chances of defending the domestic trophy. The Blues are 14 points behind league leaders Manchester City in the Premier League standings ahead of Matchday 22 and this has to go down as yet another must-win game for the title holders. Antonio Conte’s men have been impressive at the back of late and it has to be noted that they are eyeing their fifth consecutive clean sheet in the national championship. Willian produced a splendid performance in a 5-0 win over Stoke City at the weekend, but a man to watch in the away team will be Eden Hazard, who is widely expected to return to the starting XI. Chelsea are likely to rely on their rock-solid defence in the London derby, but they need to pick up all three points from the match if they are to keep their hopes of winning the Premier League trophy alive.

Centre-back David Luiz is unlikely to be risked against Arsenal, but coach Antonio Conte has no other selection worries ahead of the match. Aforementioned winger Eden Hazard returns to the starting line-up after he was rested in the 5-0 win over Stoke City.

Chelsea have been producing much better displays than Arsenal this season, but seeing that the Gunners are tough to beat at home, a close encounter is on the horizon. The two teams played out a goalless draw at Stamford Bridge earlier this term and, taking everything into account, there is a big value in betting on draw.