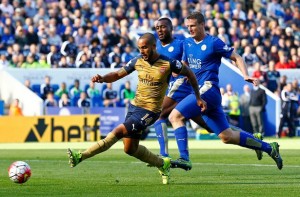 Arsenal welcome Leicester City at their Emirates Stadium in the opening match of the season. The Gunners aim to build on a win over Chelsea in the Community Shield, but the Foxes should not be written off just yet.

Arsenal failed to secure a top-four finish in the 2016/2017 Premier League campaign, but they eventually saved the season by winning the FA Cup trophy. Arsene Wenger is still in charge of the Emirates Stadium outfit and the club owners obviously have faith in the legendary coach. The Gunners did well to beat Chelsea on penalties in the 2017 Community Shield and they certainly want to kick off the new Premier League campaign in style as well. Alexandre Lacazette produced a fine display in the victory over Antonio Conte’s troops and, no doubt, the big-money signing is going to play an important role in Arsene Wenger’s team in the upcoming season. The good news for the fans is that key player Alexis Sanchez is likely to stay at Emirates Stadium and, taking everything into account, the club chiefs have big ambitions for the 2017/2018 season. It has been 23 years since Arsenal suffered their last defeat to Leicester City in the league and that is yet another reason why home win should be considered.

Alexis Sanchez is pushing for a start, whilst aforementioned attacker Alexandre Lacazette will almost certainly lead the line for the hosts against Leicester City. Francis Coquelin should be fit, but Santi Cazorla, Gabriel Paulista and Jack Wilshere remain in the recovery room. Laurent Koscielny is banned.

Shakespeare is the man

Leicester City impressed in the 2015/2016 Premier League campaign and they totally deserved to win the domestic trophy. The Foxes were producing scintillating performances under Claudio Ranieri during the season to remember, but they were struggling to find their best form in the first half of the 2016/2017 Premier League season. As a result, the Italian tactician got fired, with Craig Shakespeare taking over the reins. Leicester City have been making progress ever since the new boss took the job and, no doubt, fans have faith in the 53-year-old coach. Riyad Mahrez is likely to leave the club before the transfer window closes, but, no doubt, Craig Shakespeare is going to count on him for the opening match of the season. Top scorer Jamie Vardy is still part of the team and the opposition defenders are likely to have their work cut out for them when facing the pacey attacker.

The likes of Robert Huth, Danny Drinkwater and Islam Slimani are all out of contention with injury, while summer signings Harry Maguire and Vicente Iborra are both likely to start.

Both Arsenal and Leicester City aim to make a flying start to the season, but seeing that the Foxes often struggle on the travels, I believe that there is a big value in betting on the capital club. Duo Lacazette – Sanchez is likely to prove a handful for the opposition defenders and, taking everything into account, I am tempted to put my money on Arsene Wenger’s troops.