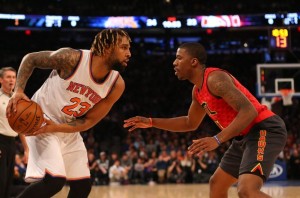 Atlanta Hawks will be looking to get their revenge on New York Knicks for a 111-97 loss when the two teams face each other at Philips Arena on Tuesday night. Hawks are eyeing their fifth consecutive win at home, but they cannot afford any complacency against Knicks.

Atlanta Hawks proved their worth in a high-scoring game against Houston Rockets. Hawks defeated Rockets 121-115 at the Toyota Center, but they were totally outplayed by New York Knicks at the Madison Square Garden (111-97) in their previous NBA match on Saturday night. Mike Budenholzer’s team have been producing scintillating performances at home ground of late and they are eager to extend their winning run at their Philips Arena to five games. Hawks made no fewer than 14 3-pointers in the triumph over Houston, with Al Horford scoring 30 points, while adding 14 rebounds. Paul Milsap was the team’s top scorer in the loss to New York Knicks and all eyes will on the duo when the two teams take on each other at Philips Arena on Tuesday. Anyhow, Mike Budenholzer’s men are tough to beat at home and they are surely capable of getting their revenge on Knicks.

Tiago Splitter missed the last three games through injury and he is unlikely to play against New York Knicks. Playmaker Schroder was rested against Knicks on Saturday evening, but he should play some part in the Philips Arena game.

As expected, New York Knicks suffered a 108-81 loss to Atlanta Hawks in their first game of the new year, but they managed to bounce back from the defeat, with the team beating Atlanta Hawks in front of home fans. Derek Fisher’s men are eager to stay in the race for a place in the play-offs, meaning that Tuesday’s game against Hawks is of big importance for the visitors. Nonetheless, the fact that Knicks suffered a loss in each of their previous four away matches is not giving the fans a reason for optimism ahead of the trip to Atlanta. Key player Carmelo Anthony failed to impress in the win over Hawks, but Arron Afflalo produced probably the best performance of his career. The 30-year-old player scored 38 points on 14-of-17 shooting in the New York victory and he will be one of the men to watch in the away team. Arron Afflalo is averaging 13.4 points this season.

Sasha Vujacic and Kevin Seraphin did not play against Atlanta Hawks on Saturday (coach decision), but they should return to the squad. Coach Derek Fisher has no fresh injury worries ahead of the game.

Atlanta Hawks were not at the top of their game in the 111-97 loss to New York Knicks, but, as I have already mentioned, Mike Budenholzer’s men tend to produce much better displays in front of home fans. Hawks aim to give fans some festive cheer following the Madison Square Garden defeat and I believe that there is a certain value in betting on the hosts. Knicks struggle on the travels and they are unlikely to upset Atlanta at the Philips Arena on Tuesday evening.