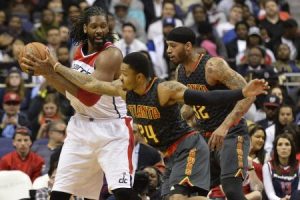 Atlanta Hawks and Washington Wizards face each other at Philips Arena in the opening match of the season. Both teams have big ambitions for the 2016/2017 NBA campaign, but it remains to be seen who will have a reason for celebration on Thursday evening.

Hawks tough to beat at home

Atlanta Hawks impressed in the 2015/2016 regular season and they did well to beat Boston Celtics in round 1 of the Eastern Conference play-offs. However, Cleveland Cavaliers proved to be a big catch for Hawks as they were beaten 4-0 by LeBron James and Co. in the Conference semis. Atlanta chiefs did well to sign experienced center Dwight Howard and it remains to be seen if he is going to make life difficult for Washington Wizards on his official debut. The likes of Kyle Korver, Paul Millsap and Dennis Shroder are still part of the team, but Al Horford moved to Boston Celtics in the summer. Hawks are a real force to be reckoned with at home and you should know that they recorded six wins in previous eight matches in front of home fans.

Paul Millsap was involved in a car accident last week, but he is likely to play in Thursday’s game against Washington. Tiago Splitter misses the match with a right hamstring strain, but Mike Budenholzer has no other selection worries.

Washington Wizards were playing below expectations in the 2015/2016 NBA season and, as a result, the club owners decided to fire coach Randy Wittman. Scott Brooks took over the reins in April and the new boss is eager to help Wizards book their place in the play-offs this time out. The likes of Ian Mahinmi, Andrew Nicholson and Jason Smith joined the club in the summer, with the team re-signing Marcus Thornton. Anyhow, John Wall is still regarded as the team’s brightest star and all eyes will be on him when Wizards take on Atlanta in the opening match of the season. Washington often struggle on the travels and they recorded only two wins in previous six away games in NBA. In their last meeting with Atlanta in Georgia, though, Wizards emerged triumphant (117-102) and that is giving fans a reason for optimism ahead of Thursday’s clash.

New signing Ian Mahinmi will be out of contention for six weeks after suffering a knee injury. Coach Scott Brooks has no other injury concerns ahead of the trip to Atlanta.

Both Atlanta Hawks and Washington Wizards are regarded as good hosts, but their away record is anything but good. Many people believe that Al Horford is going to be sorely missed for Atlanta this season, but Mike Budenholzer is doing a great job with Hawks and, taking everything into account, I believe that the hosts will emerge triumphant in the opening match of the season.