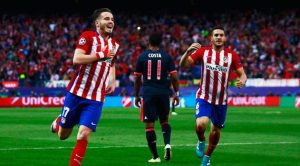 Atletico Madrid will be looking to build on back-to-back wins over Malaga and Athletic Club when they take on Sevilla at their Estadio Wanda Metropolitano. Los Rojiblancos aim to melt Barcelona’s advantage in the La Liga standings, but los Sevillanos should not be written off just yet.

Atletico Madrid failed to impress in a 1-0 win over Malaga in their first ever match at their new stadium Estadio Wanda Metropolitano, but the capital club produced a much better performance in a 2-1 win over Athletic Club in midweek. Los Rojiblancos created a number of clear-cut chances to score in the triumph over the Basque outfit and despite the fact that the Lions had a penalty saved in the first half, Diego Simeone’s men totally deserved to pick up all three points from the game. Atletico Madrid sit in third place in the standings ahead of the visit of Sevilla and they aim to stay in the race for the title. Los Rojiblancos are likely to go all guns blazing at Eduardo Berizzo’s troops, but seeing that the visitors have been in a fine form at the start of the season, we are not tempted to put our money on the capital club.

Filipe Luis picked up a knock against Athletic Club and he is rated doubtful for the Sevilla game. Midfielder Augusto Fernandez remains in the recovery room.

Sevilla failed to impress in a 1-1 draw with Espanyol on the opening day of the season, but they have been impressive in the Spanish top flight ever since. Los Sevillanos are on a four-match winning run in La Liga ahead of the trip to Madrid and they are eyeing their fifth consecutive clean sheet. Jesus Navas, who returned to Sevilla in the summer transfer window, scored a wonder goal against Las Palmas on Wednesday evening and helped Eduardo Berizzo’s team pick up all three points from the match. The former Celta Vigo coach is doing a great job with the Estadio Ramon Sanchez Pizjuan outfit and his men are definitely capable of spoiling Atletico Madrid’s party at Estadio Wanda Metropolitano. Wissam Ben Yedder missed a clear-cut chance to score in the 1-0 win over Las Palmas as he was one-on-one with the goalkeeper, but the French attacker is likely to keep his place in the starting line-up. It has to be noted that Sevilla recorded a hard-fought 1-0 win over Girona in their last away game in La Liga.

Midfielder Ever Banega is widely expected to return to the starting XI, whilst Noliton and Guido Pizarro are both rated doubtful and the duo will be assessed on the match day.

Atletico Madrid proved their worth in the 2-1 win over Athletic Club, but they will have a much bigger fish to fry in Saturday’s clash against Sevilla. The Andalusian side have been impressive at the back of late and given the strength of Atletico’s defence, a low-scoring affair appears on the cards.