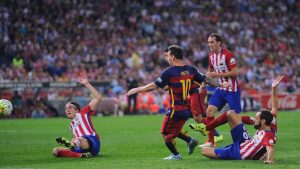 Barcelona will be looking to build on a thrilling 5-1 win over Leganes when they face Atletico Madrid in Wednesday’s La Liga derby at their Camp Nou. Los Rojiblancos impressed in a 5-0 victory over Sporting Gijon at the weekend, but beating Luis Enrique’s troops on the road is easier said than done.

Barcelona suffered a shocking 2-1 loss to Deportivo Alaves in their last home game in La Liga, but they quickly bounce back from the upsetting defeat. The Catalan giants hammered Celtic 7-0 in their Champions League opener, while rolling over Leganes in their last league fixture. The reigning champions sit in second place in the standings, three points behind their fierce rivals Real Madrid and they face a must-win situation in Wednesday’s clash against Atletico Madrid. Trio MSN impressed in the 5-1 win at Leganes and, no doubt, Messi, Suarez and Neymar are going to make life difficult for the opposition defenders. Luis Enrique’s men are desperate to return to winning ways at their Camp Nou, but the title holders will have to be at their sharpest if they are to pick up all three points from Wednesday’s encounter against Atletico Madrid.

Luis Enrique has no fresh injury worries ahead of the game and he is likely to field the best possible side against Atletico Madrid. As reports in Spain suggest, full back Umtiti could start from the bench this time out. Luis Enrique is likely to switch to the 4-3-3 formation.

Atletico Madrid failed to beat Alaves in the opening match of the season as the newcomers scored a late equalizer in the Estadio Vicente Calderon clash. To make things even worse for the fans, los Rojiblancos dropped two points in a goalless draw with Leganes and, no doubt, coach Diego Simeone was under big pressure ahead of Matchday 3. Atletico Madrid, though, proved their worth in a 4-0 win at Celta Vigo and they totally outplayed Sporting Gijon at the weekend (5-0). The capital club are brimming with confidence ahead of the trip to Catalonia, but Wednesday’s game against Leo Messi and Co. will be anything but a walk in the park for the visitors. Antoine Griezmann has found his goal-scoring touch of late and all eyes will be on the French attacker when the two teams face each other at Camp Nou in Wednesday’s La Liga derby.

Goalkeeper Miguel Angel Moya and midfielder Tiago remain in the recovery room. Fernando Torres scored a brace against Sporting Gijon, meaning that he could be recalled to the starting line-up. Summer signing Nico Gaitan is likely to keep his place in the starting XI.

Both Barcelona and Atletico Madrid have been producing scintillating performances in La Liga of late. Barca outclassed Leganes at the weekend, while los Rojiblancos demolished Sporting Gijon on Matchday 4 and there is every chance we will see a lively contest in Wednesday’s derby. The Catalan outfit failed to keep a clean sheet in previous three league fixtures and I am positive that the visitors are going to find the net in the Camp Nou showdown. Given Barca’s attacking potential, both teams to score bet appears on the cards.