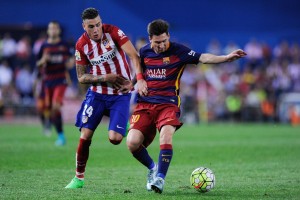 Barcelona and Juventus face each other at Camp Nou in the Group D derby in the Champions League. The Catalan giants were beaten by the Bianconeri in the knockout stages of the elite competition last term and, no doubt, Ernesto Valverde’s men are hungry for revenge.

No Neymar, no problem

Barcelona chiefs were forced to sell star player Neymar to PSG in the summer transfer window, meaning that new coach Ernesto Valverde can’t count on the MSN trio for the 2017/2018 season. However, Neymar’s replacement Gerard Deulofeu has been producing thrilling showings in La Liga this term and the Catalan giants seem to be on top of their game ahead of their Champions League opener against Juventus. Barcelona crushed Espanyol in the Catalan derby at the weekend, with Leo Messi scoring a hat-trick for Ernesto Valverde’s troops and, no doubt, all eyes will be on the “Argentine magician” when the La Liga side welcome Juve at their Camp Nou. Luis Suarez scored as well on his return from injury and the Uruguay international is likely to pose a big threat for the opposition defenders as well. It has to be noted that Barcelona recorded 15 wins in previous 16 home games in the Champions League.

The likes of Arda Turan, Sergi Roberto and Rafinha remain in the recovery room, but coach Ernesto Valverde has no fresh injury worries ahead of the visit of Juventus. The former Athletic Bilbao boss should stick to the 4-3-3 formation.

Impressive start in Serie A

Juventus did well to reach the Champions League final last season, but they were totally outclassed by star-studded Real Madrid in the title game. The Bianconeri aim to go all the way in the elite competition this term, but they face a difficult task in their opener against Barcelona. Max Allegri’s troops recorded a win in each of their three league fixtures at the start of the new Serie A campaign and that is giving fans a reason for optimism ahead of the trip to Catalonia. Paulo Dybala has been producing outstanding performances in the Italian top flight of late and the opposition defenders should have him at bay. In their last meeting at Camp Nou the two teams played out a goalless draw and there is every chance the Serie A champions will rely on their rock-solid defence in Tuesday’s derby. However, it has to be noted that key defenders Leonardo Bonucci left the club in the summer transfer window, meaning that Juve’s defence could be a bit shaky this time out.

The likes of Sami Khedira, Juan Cuadrado, Marko Pjaca, Giorgio Chiellini and Claudio Marchisio are all out of contention. Summer signing Blaise Matuidi is likely to start against Barcelona.

Barcelona are determined to get their revenge for the heartbreaking loss to Juventus in the 2016/2017 Champions League quarter-finals and I am positive that the Catalan titans are going to leave their hearts on the field in Tuesday’s showdown. Juve coach has some selection worries ahead of the Champions League opener and, taking everything into account, home win should be considered.