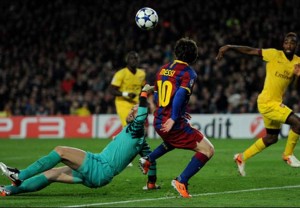 Barcelona and Manchester City face each other at Camp Nou in the Group C derby. The Catalans aim to keep their 100% record intact in the Champions League, but they will have to prove their worth on the field.

Barcelona kicked off the new season in style, but the Catalan giants have been having their ups and downs ever since Argentine superstar Leo Messi suffered an injury. The “Magician”, though, came as a substitute in Saturday’s La Liga clash against Deportivo La Coruna and he managed to find the net on his return. Barca are eyeing their third consecutive win in the Champions League, but Wednesday’s clash against Manchester City will be anything but a walk in the park for the La Liga champions. Anyhow, Luis Enrique can count on the “MSN” trio for the Group C derby and there is every chance the Catalan giants will go all guns blazing at the Citizens in the Camp Nou showdown. Barcelona hammered Celtic 7-0 in their previous home game in the Champions League and that is giving fans a reason for optimism ahead of the visit of Manchester City.

Leo Messi is not yet fully fit, but he is pushing for a start, while Jordi Alba and Sergio Roberto both returned to training and they will be monitored ahead of the kick-off. Andres Iniesta could be recalled to the starting XI after he was rested against Manchester City.

Citizens are hungry for revenge

Manchester City have been producing fine performances under former Barcelona coach Pep Guardiola, but the team’s recent form is anything but good. Following a 2-0 loss to Tottenham Hotspur at White Hart Lane, the Citizens shared the spoils with Everton at their Etihad Stadium at the weekend, but it has to be noted that they missed two penalties in the 1-1 draw with Ronald Koeman’s troops. The Premier League side kicked off their Champions League campaign with a 4-0 win over Borussia M’gladbach, but they failed to beat Celtic in Glasgow in their second group game. The good news for the fans is that key midfielder Kevin De Bruyne has overcome his injury and he will certainly pose a big threat for Barca defenders in Wednesday’s Champions League clash. Kun Aguero missed a penalty against Everton, but the Argentine attacker is widely expected to lead the line for the visitors. Man City were beaten by Barca in the 2014/2015 Champions League knockout stages and, no doubt, Pep Guardiola’s men are hungry for revenge.

Vincent Kompany has overcome his injury and he should be recalled to the starting line-up. Fabian Delph and Bacary Sagna remain in the recovery room, but coach Pep Guardiola has no other selection worries ahead of the trip to Barcelona.

Manchester City do not seem to be at the top of their game ahead of the Champions League game against Barcelona and seeing that Leo Messi returns for Luis Enrique’s team, I believe that there is a big value in betting on the hosts. Barca emerged triumphant in each of previous four meetings with the Citizens in the Champions League, meaning that the visitors should return home empty-handed.