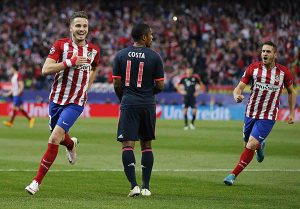 Bayern Munich and Arsenal, the two old rivals, face each other at Shanghai Stadium at the 2017 International Champions Cup. The Gunners are desperate to get their revenge on Bayern Munich for the heartbreaking loss in the 2016/2017 Champions League knockout stages, but beating the mighty Bavarians is easier said than done.

Bayern Munich are the dominant force in the German Bundesliga. The Bavarians defended the domestic trophy last season without any difficulties and they were more than unfortunate not to eliminate Real Madrid in the Champions League quarter-finals. Carlo Ancelotti is still in charge of the team and his men are regarded as hot favourites to win the 2017/2018 Bundesliga title. Douglas Costa is no longer part of the team, with the pacey winger joining Italian champions Juventus in the summer, but the club chiefs did well to sign Real Madrid superstar James Rodriguez. The Colombian midfielder was in Cristiano Ronaldo’s shadow during his spell with the Estadio Santiago Bernabeu outfit, but he is likely to play an important role in Carlo Ancelotti’s team next season. Bayern Munich kick off their International Champions Cup campaign with a match against Arsenal and it remains to be seen if they are capable of recording their fourth consecutive victory over Arsene Wenger’s troops.

Coach Carlo Ancelotti is likely to use Wednesday’s match to test as many players as possible. Aforementioned midfielder James Rodriguez is widely expected to start, but first-choice goalkeeper Manuel Neuer misses the match with an injury.

New boy Lacazette eager to prove his worth

Arsenal finished the 2016/2017 Premier League campaign in fifth place in the standings and, as a result, they failed to book their place in the Champions League for the first time in 20 years. The Gunners, though, saved the season by beating Chelsea in the FA Cup final and that is probably the main reason why coach Arsene Wenger did not get sacked. The French tactician is on a quest to reinforce the squad in the summer transfer window and, no doubt, he made a right decision when he signed Lyon top scorer Alexandre Lacazette. The prolific attacker has already scored for the capital club, with the 26-year-old footballer finding the net in a 2-0 win over Sydney in Arsenal’s first warm-up game. The Gunners outplayed Western Sydney as well (3-1), but they will have a much bigger fish to fry in Wednesday’s clash against Bayern Munich.

The likes of Gabriel Paulista (knee), Jack Wilshere (leg), Santi Cazorla (Achilles) and Joel Campbell (knee) are all out of contention through injury.

Despite the fact that Arsenal are hungry for revenge, I do not believe that they are capable of making life difficult for the star-studded German champions at the start of the 2017 International Champions Cup. The Gunners suit Bayern Munich and, taking everything into account, home win should be considered.