Opinion The Benefits and Downsides of BitCoin during Governmental Instability 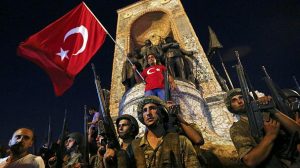 As the world moves deeper into the 21st century, it is becoming more and more clear that the notions of traditional peace and security which were established after the WW2 in developed and developing countries are slowly fading away. Climate change, poverty, the rising threat of terrorism and less certain economic models are all reminiscent of the first decade of the 20th century, which ushered a time of huge destruction for many regions of the world.

Today, no one can tell with certainty whether or not are we living in a prolonged period that can be summed up as the “new 1913”, or an age where the old system is about to give in one way or another. The situation that occurred in Turkey over the course of one night on July 16, 2016, showcases the same fears perfectly. Over less than 24h, a coup d’état was triggered and defeated by the popular uprising and as of yet undefined government factions, especially those in the police forces of major cities like Ankara and Istanbul.

But, even though the situation seems to be gradually morphing into a huge government crackdown, the issue that remains is still very worrying: no one saw the coup attempt coming and practically no one had a clear response to it outside of Turkey.

While Turkey’s President Recep Tayyip Erdogan acted immediately and called for the people and his supporters to go to the street and defy the military units, others seemed to be taken back by the same development and the country was left without any formal structure for one night. In this type of fast-changing world, what role will BitCoin play if the established system begins to go dark?

The failed coup of 2016 is a great example of the same vulnerability that the future brings – the event came completely out of the blue and left the country and the world stunned. But, it definitely rode on the instability that plagued the country since the start of the conflict in Syria, especially the series of disastrous terrorist attacks that took place in the previous 12 months. While some of these were committed by the ISIS fractions and other by the PKK which is once again fighting the Turkish state, the result was the same: the loss of life and instability took a toll on the expanding industrial domains, mainly tourism.

But still, the coup was not something that was expected. BitCoin, as a very flexible digital currency, is in theory the ideal partner for any system that is unstable through any potential reason. As a distributed ledger currency, it is independent of a centrally organized system, but internally and externally. With this in mind, the price of BTC could bounce back quickly from any unprecedented event.

However, the reality shows that the external independence is not completely accurate. While during peaceful times BitCoin is employed to bet online and do plenty other things, with this type of instability, the events take a direct impact on the currency in a similar manner they do on everything else. The Turkish coup might not have had a huge impact so far on the currency, but it would be pure wishful thinking to consider the notion of BTC price being insulated from the fallout.

As the number of similar surprises gradually increases in the future which will be, as far as we can tell right now, riddled with scarcity, climate change, and conflict, the digital currency will have to become even more agile in its basic nature.

While there are no clear guidelines how this can be accomplished, it is certain that BTC community has to start employing additional measures to compensate for this. With adequate preparation, BTC could go into overdrive when this major instability occurs, bringing investors who are looking to minimize their losses quickly into the network.

One of the first things the coup leaders (whoever they might turn out to be) did when they begin their action was to place as many communication channels under restrictions. Aside from trying to seize the TV networks in the country, the military also apparently started blocking social media in the nation, which provided only limited effect. As analysts noticed, previous coups carried out in Turkey included seizing the radio stations which was the most used mass media in the nation until the late 1990’s.

Today, the situation could hardly be any more different. With practically all citizens in the possession of mobile phones and smart connected devices, the media blockade proved too little of an impact to really help the coup leadership. Even with the big social networks being taken down, the people found ways how to connect with one another and organize. With E-Sports, gaming consoles and many more forms of digital activity offering direct communication features, blocking channels selectively is becoming less effective with each passing year and Turkey is proof for this.

This provides an important benefit for the BitCoin network even in the case of widespread governmental disturbance – the decentralized network can function even if its many individual nodes are taken out. The only problem could potentially occur if the entry points for the internet infrastructure are shut down, but as the Turkey scenario shows, this is both difficult to pull off and no faction truly wants to stay in the dark. As long as this type of mentality continues, the BTC currency should stay operational even if entire governments go dark for short periods of time.

The Degrading Trust in the System

BitCoin is a P2P network, but it still provides its users with an alternative to the established systems in the financial domain. As more and more countries and even entire continent-wide structures like the EU show their weaknesses, a lot of which had so far remained under the radar, people are looking for alternatives.

While there is little possibility of finding a workable alternative to entire governmental systems, it appears that BitCoin could very well offer that option in the financial domain. Here, the questions that hamper traditional banking and finance sectors simply do not count as relevant anymore. From a digital perspective, many of those are just relics of a period that has ended decades ago, but still, clings on to existence thanks to the powers that be.

Now, as the powers that be become more and more confused by the modern times, BitCoin network is spreading to the minds of people and companies as something outside of the (potentially) crumbling setup. While nothing, including BTC, really profits from permanent instability, so far the turbulence of the 21st century has provided the network with a dynamic environment where it can expand as a FinTech system of choice for the uncertain years that are ahead of us.