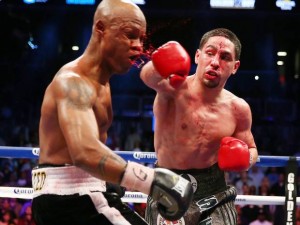 Boxing is one of the oldest combat sports around, and people have bet money on boxing for a very long time. It should come as no surprise then, that when it comes to betting on sporting events with Bitcoins, boxing is fairly high up on the list of people’s interests. Boxing isn’t like other sports, in that there is no one league, or cup competition.

Instead, boxing is divided up into either professional or amateur boxing statuses, each one with their own divisions, based on the weight of the boxer in question. These divisions each have titles, and it is those titles that are on the line in the biggest and most wagered on boxing fights.

Bet BitCoins on Boxing at CloudBet

There are any number of competitions you can bet on with boxing, although as we’ve said, there is no one division. Normally, most people will bet their Bitcoins on professional boxing matches, although amateur fights can also sometimes be wagered on. It is also possible to bet money on boxing as an Olympic Games sport, but with those taking place every four years, you could be in for quite a wait.

Professional boxing is ideal for Bitcoin bets. Normally, most boxing bets are based on the World Heavyweight title, which is the pinnacle of the boxing ladder. These events can last between ten and twelve rounds (providing a boxer isn’t knocked out prior to that), and victors can sometimes be decided by points, given by judges.

When boxing at this level, no headgear is worn, and massive sums of money are available in the “purse”, to be split between the fighters. In a professional boxing match, players will almost always only be able to bet money on the victor of a fight. Professional boxing matches take place on an evening of fights, so there will often be undercards (other boxing matches, though not as significant as the “main event”) for you to bet on during fight night.

Amateur boxing on the other hand, is less common to bet on, but still readily available. An amateur boxing match is almost identical to those held in the Olympic Games and Commonwealth games, which we will come to, shortly. These events are almost always scored by a points system, whereby judges award points based on the number of clean blows delivered by a boxer on his or her opponent. Headgear is worn in amateur boxing, and competitors will normally be identified by blue or red colours, which is different from professional boxing, where competitors wear their own colours and shorts.

Although most major sportsbooks offer boxing bets, there are only a handful of them out there at the moment that deal with Bitcoin boxing events. One such site is CloudBet. They offer plenty of amateur and professional boxing events for you to bet your Bitcoins on.

Unlike other sports (which have a regular season), boxing bets are available all year round. Most people like to put their Bitcoin bets on their favourite fighters, though. Most fighters only box once, twice perhaps even thrice per year, so it can often be a while before a really top drawer fight is available for you to bet on, even with CloudBet. On a lighter note, CloudBet has an amazing welcome bonus offer, which you can use to top up your balance in time for the big fight.