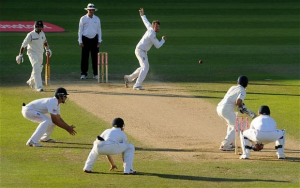 Cricket is a widely popular sport, which is mostly played by members of the Commonwealth. Although you might not think it, it is actually the second biggest sport in the world, in terms of the number of players it contains. Cricket has a long and illustrious history, stemming back to the sixteenth century in England.

Modern cricket though, began in the eighteenth century. Today, Cricket is played in a host of countries across the globe, with Australasian countries, England, India, the West Indies, Pakistan and African countries being the main nations involved in the game. With so many different events, there’s plenty to bet your Bitcoins on, when it comes to cricket.

There are many kinds of domestic cricket competitions that you can wager on, as well as international events. You can even wager on individual exhibition games, which are known as test matches. Tests can last up to five days, so there are many different aspects to betting on Cricket with Bitcoins. Below are three of the more popular cricket competitions to wager your Bitcoins on.

Australia’s number one cricket competition is the KFC T20 Big Bash League. The Big Bash League originated in 2011 and replaced the Twenty20 Big Bash competition. The main reason to replace the league was the decision to include city teams, instead of state sides.

Just like in European football, the top two teams at the end of the season qualify for the Champions League of cricket. Since the founding of the league, the Perth Scorchers have bagged two titles (the two most recent editions of the league), whilst the Brisbane Heat and Sydney Sixers each have a title, too.

England also used to play in the competition, but stopped due to conflicted fixtures between their domestic league season and the competition. The very first Champions League T20 was cancelled due to the 2008 Mumbai terrorism attacks. Since then, Indian teams have been the most successful in the tournament, winning 4 titles, whilst Australian teams have won two titles.

The Indian Premier League is regarded by many as the number one Twenty20 Cricket tournament in the world. A total of 8 teams play in this league, which is run from April to June each year. The league is also the most open, with 5 different teams (out of a total of 10 to have ever appeared in it) winning the league since its inception in 2008.

The Chennai Super Kings are the top champions, having won the tournament twice. Now in its eighth season, the Indian Premier League has expanded to include some of the most famous names in international cricket, and has cemented itself as a major sporting event by securing sponsorship and coverage deals across the globe, with many top broadcasters and businesses.

Where can I bet on cricket with Bitcoins?

Cricket bets can be made in a host of places, although there is really only one place you should be staking Bitcoin bets with. Bitcoin sporting bets are accepted at CloudBet, which is regarded by many to be the number one Bitcoin sports betting website. CloudBet also has a very generous welcome bonus, which can be claimed by all first-time depositing players at the Bitcoin sportsbook.