Bet On NFL With BitCoin 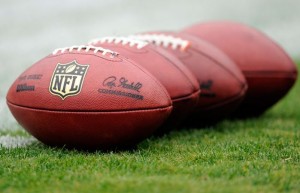 The NFL stands for the National Football League, and it is the highest form of American football which can be played in the United States. As one of the most watched sporting events in the country, the NFL is ripe for you to place Bitcoin bets on.

The season is somewhat short, though, in comparison with other major sporting leagues from across the globe; so, players will need to act fast, when it comes to betting on the NFL season.

The National Football League runs for a total of 17 weeks a year, from Labor Day (in September) until Christmas. 32 teams compete in the NFL, divided up into two conferences (AFC and NFC) of four regional divisions each. Those divisions are divided up into Eastern, Northern, Southern and Western leagues. The season culminates in the Super Bowl, to determine a national champion. The Super Bowl itself is one of the most watched sporting events in the world of sport.

Bet on NFL With BitCoin at CloudBet

100% up to 5BTC
Platform from SoftSwiss with NetEnt, MicroGaming, Ezugi. US Friendly for Bitcoin.
Info
Play
2

The history of the NFL

Originally, the format of competition saw the top finishing side (in the league) declared the national champion. In 1932, both the Chicago Bears and the Portsmouth Spartans were tied at the top, and so a playoff game was used to determine the winner. This would prove incredibly popular, and so in 1933, the NFL was split into two divisions, with the playoff game determining the winner of the championship. Darker times in 1933 saw the beginning of thirteen years where African American players were not permitted to play, although this ban was removed in 1947.

By 1960, the AFL (American Football League) began to challenge the NFL, and so in 1970 the leagues were merged. This was when the Super Bowl came into effect, becoming the championship decider between the NFC and the AFC conferences (which were formed after the merger). Today, the Green Bay Packers are the most successful team in NFL history, with a total of 13 titles. They are not the reigning champions, however, as that honour belongs to the New England Patriots.

After preseason has ended, the conference stage of the NFL season begins. Over the course of 17 weeks, 256 games will be played in total. Each team will play those in its regional division twice, once at home and once away, for a total of 6 games. They must then play a single match against a side from another regional division in their conference, this rotates every year. One game must also be played against a team in the same region from the opposing conference.

Finally, each side must play single matches against those teams which finished in the same position as them, in the other regional divisions in their conference. In total, sixteen matches will be played by each team, with one week taken off without a fixture.

The top two teams from each conference then join the fray in the Divisional Round, before the Conference Championship round determines which team is the winner of each conference. Finally, the AFC and NFC champions will square off in the Super Bowl, which is the championship decider in the NFL season.

Place bets on the NFL with CloudBet

NFL is a truly massive sport, and one which many players can enjoy when placing bets with Bitcoins. One of the finest places you can do this with is CloudBet. This is a tip-top Bitcoin sports betting site, and they cover all of the NFL action, with a host of exciting bets, when the season is on.

CloudBet also has a huge selection of Super Bowl bets for you to make after the Christmas period. As well as hosting NFL bets, they are also renowned for their generous odds, which can make the day of any NFL fan wanting to have a punt with their Bitcoins.