Bet On Moto GP With BitCoin 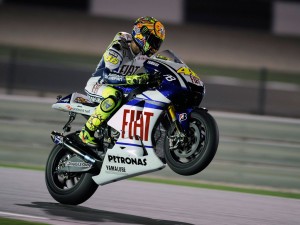 The Moto GP is the number one racing event for motorcycles. There are three main divisions in the sport; namely the Moto GP, Moto 2 and Moto 3. The highest of these is, of course, the Moto GP and that is what we are going to focus on.

If you wish to place Bitcoin bets on the Moto GP, there are a number of great Bitcoin sportsbooks that you can choose to do so with. But before we come to that, let’s take a closer look at the sport itself.

The Moto GP is held each year. The rules for the competition also change frequently. At present, the motorcycles feature four-stoke engines, and can only contain up to 65kg of fuel. Moto GP bikes have an engine capacity which varies from 800cc up to 1,000cc. These are in effect, super bikes. They are custom built for racing, and cannot be found outside of the sport.

Since the financial crisis, several changes have been implemented to Moto GP races. Firstly, Friday practice sessions have been abolished, as have several types of brakes. This has reduced the cost of the events, due to a lack of testing sessions, and has resulted in prolonged lifespans for the bikes’ engines.

Bet BitCoins on MotoGP at CloudBet

The history of Moto GP

The Moto GP first began in 1949, with the very first world championship grand prix featuring motorcycles. Sidecars were a staple of Moto GP racing back then. Honda first entered the Moto GP tournament in 1959, at the Isle of Man TT. They would go on to win the constructor’s championship for the first time in 1966. In 1975, Yamaha became the first non-European manufacturer of Moto GP bikes to win the rider’s championship, with the first American champion coming in 1978, with Kenny Roberts’ victory.

The next major change to the sport occurred in 1990, when the grid was changed from five to four bikes per row. In 2003, Daijiro Kato is killed during the Japanese GP, whilst the grid was reduced to three cars per row in 2004. In 2005, another major rule change allowed drivers to pit and switch to bikes with wet-weather tyres in rainfall, whilst two years later, Ducati becomes the first European brand to win in the Moto GP in 30 years.

In 2013, the knockout style of qualifying was introduced, which is similar to the method used to determine grid positions in Formula One. This year, Suzuki returned to Moto GP after a four year absence, and Bridgestone tyres were replaced by Michelin.

The most celebrated champion in Moto GP history is Giacomo Agostini. He won 15 titles over various classes, whilst the most races won in a season record belongs to Mike Hailwood, who won 10 out of 12 races in 1966. The most successful rider in modern times is Valentino Rossi, who has won 7 Moto GP titles, whilst the reigning world champion is Marc Márquez.

The times set in the three free practice sessions of a race weekend, will determine which qualifying period a rider enters. Q1 (qualifying round one) will consist of riders who times are eleventh or lower.

The two fastest riders in the session will qualify for Q2, along with the top ten fastest riders in free practice. Those riders will then race around the circuit to determine the top of the starting grid, by order of the fastest times.

Ten, nine, eight, seven and six points are available for drivers finishing sixth to tenth. Drivers finishing in eleventh to fifteenth place will pocket 5, 4, 3, 2 points and 1 point, for each respective finishing place.

You can place bets on the Moto GP with your Bitcoins, by joining a Bitcoin accepting sportsbook, such as CloudBet. CloudBet allows you to place bets not just on the race-winners, but also the season as it unfolds. If you love Moto GP racing, and you want to bet with Bitcoins, CloudBet is the place to do it.