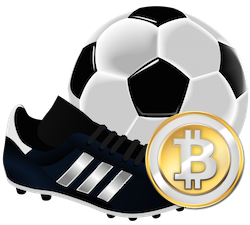 Due to it being such a global sport, it doesn’t really matter what time of the year it is, there are always football competitions to bet on. Grab hold of your Bitcoins and get ready for the ride of your life, football betting has never been so exciting.

Most of us tend to favour our own domestic leagues and cups, or those competitions that our beloved teams are currently involved in. It doesn’t have to be that way, though. There are so many different competitions for you to bet on, that you can expand your horizons and wager on all sorts of football events, as you will see here. Let’s take a quick look at some of the more premier competitions in world football, which you can use Bitcoins to bet on.

Bet Soccer With BitCoin at CloudBet

Next year, the football world will be treated to Euro 2016, which will be held in France. Even though the tournament doesn’t actually start until next summer, you can already place bets on who you think is going to win. We are still currently in the qualification phase of the tournament, but you can still bet on the European nations which you think will make the final 24 teams right now, as well as on the results of the individual matches in the qualification campaign.

The Copa America is played between the South American teams, and is their equivalent of the Euros. This competition is scheduled to start soon, between June 11, and July 4. This year, the tournament will be held in Chile. All 10 members of CONMEBOL (the South American football confederation), and two teams from CONCACAF (the North American football confederation), namely Jamaica and Mexico, will compete to win the trophy. Bets on this football competition are already flying.

Regarded by most as the finest football league in the world, with the largest global audience of viewers, the English Premier League (known officially as the Barclays Premier League) is ripe for betting with Bitcoins. The 20-team top flight division has some of the world’s most famous football clubs, and always ensures a tight title race. You can even bet on which 3 teams will be relegated, so the dog-fight battle is worth a punt, too.

Spain Premier football competition is known informally as La Liga. Its proper name is the Liga Nacional de Fútbol Professional, and it is also regarded as one of the top divisions in the world. Betting on Barcelona, Real Madrid or Atlético de Madrid might seem rather easy, but there are plenty of thrills and spills in La Liga for you to stake your Bitcoins on.

Meanwhile, Germany’s top division also makes for solid sports betting with Bitcoins. The Bundesliga is often won by FC Bayern München, although some surprises have shaken the league in recent years. This is considered as one of the more predictable football leagues, which might be what you’re looking for with your Bitcoin sports bets?

The UEFA Champions League is a continental cup competition, played between the domestic champions and highest finishing teams in the major European football leagues. It begins as a group stage, and ends in knock-out format. The Champions League is famed for surprises, so if you love underdogs, then this competition could be for you.

Those teams which have won domestic cups, and those who have performed admirably, but didn’t finish high enough in their domestic leagues, may gain entry into the Europa League. Known as Europe’s second major continental cup competition, the Europa League is always a surprising affair. This is a knock-out cup competition which really does favour the smaller teams. It is also one of the most difficult to predict a winner in.

There are other football competitions to bet on, too. Domestic cup competitions in all of the major footballing nations can be bet on, as can a host of other domestic football leagues, including lower league football in many of those major nations. American, Argentinian, Australian, Austrian, Belgian, Brazilian, Croatian, Czech, Danish, Dutch, English, Finnish, French, German, Greek, Indian, Irish, Italian, Japanese, Mexican, Norwegian, Polish, Portuguese, Russian, Scottish, South African, Spanish, Sweden, Swiss, Turkish, and Ukrainian cup and league competitions are just some of the events you can make bets on with Bitcoins. There are many more out there, too.

Where can I bet on soccer with Bitcoins?

One of the best places where you can wager on football matches and competitions with your Bitcoins, is CloudBet. They offer all of the above competitions, as well as many more not listed here. If you love your football (soccer), and you want to play with Bitcoins, CloudBet is place to be.