Bet On Wimbledon With BitCoin 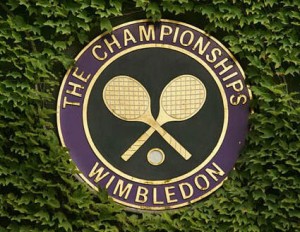 Few sporting events come any bigger than Wimbledon. Named after the location where it held, this is tennis’ number one competition.

Also known as The Championships, Wimbledon is the oldest professional tennis competition in the world, having begun in 1877.

Unlike other tennis competitions which have changed location, Wimbledon has been played at the All England Club since 1877. Such a popular competition as this is just perfectly set up for you to bet your Bitcoins on.

Wimbledon is the only major tennis event that still plays on grass. The tournament is played once per year, and takes two weeks to reach its conclusion. Generally speaking, Wimbledon begins at the end of June and runs into July. Wimbledon is rather famous for its dress code, which insists that ladies must wear skirts, and that outfits must be white.

Many celebrities (including the royal family) turn up for the tournament, which is watched by millions of people across the globe. Despite being a stickler for traditional tennis, the Centre Court was upgraded to include a retractable roof in 2009. Wimbledon matches are often delayed due to rain, such is the weather, even in summer.

The history of Wimbledon

Ladies doubles and mixed doubles wouldn’t appear until 1913. Curiously enough, the previous years’ champion would receive a bye straight into the final the following year.

In would be 1968 before Wimbledon would become an “Open”. Much work has been done to transform Wimbledon since the 90s. From 1994-1997, a new No. 1 Court was built, as well as two other grass courts. Between 1997 and 2009, the old No. 1 Court was removed, with a new Millennium Building being built in its stead. From 2000-2011, other facilities were also added, including a museum, staff housing building, and ticket office. A retractable roof was added in 2009, around about the same time that a new No. 2 Court was built in place of the old No. 13 Court.

The local tennis fans have waited a long time to land a Wimbledon champion. Fred Perry was the last British man to win the Wimbledon men’s single title, in 1936. Despite the efforts of Tim Henman (who always got their hopes up, only to be eliminated), Andy Murray finally restored the Wimbledon crown to Britain in 2013. No British woman has landed the Wimbledon crown since 1977, when Virginia Wade won.

William Renshaw, Pete Sampras and Roger Federer have the most Wimbledon men’s single titles, with 7 apiece. The most women’s singles titles have been won by Martina Navratilova, who claimed 9 crowns between 1978 and 1990.

There are many events which take place at Wimbledon. The men’s and women’s single competitions features 128 players each, whilst the men’s and women’s doubles each feature 64 players. 48 people participate in mixed doubles matches throughout the tournament.

The current men’s champion is Novak Djokovic, after he defeated Roger Federer in last year’s final. Petra Kvitová is the women’s champion, having ousted Eugenie Bouchard in the 2014 final. The gentleman’s doubles winners were VasekPospisl and Jack Sock, who defeated Americans Bob and Mike Bryan.

The 2014 ladies’ double winners were Italians Sara Errani and Roberta Vinci, after they beat TimeaBabos and Kristina Mladenovic in the final. In 2014, the mixed double final saw NenadZimonjic and Samantha Stosur defeat Max Mirnyi and Hao-Ching Chan, 6-4, 6-2.

Place bets on the Wimbledon with CloudBet

Let’s face it. If you are going to be betting on tennis, then you should be betting on Wimbledon. More to the point, if you are going to bet with Bitcoins, then there really is only one place you should be betting, and that place is CloudBet. They have nothing but the finest odds on Wimbledon matches, including those on most of the competitions that Wimbledon hosts. Whether you want to back a player, a tournament winner, or a doubles team, CloudBet is the way to go.