Industry News Bill Gross: The State of the Markets is Pushing Capital towards Bitcoin 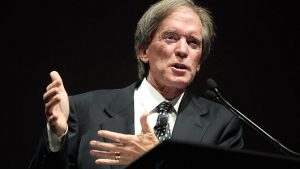 The modern financial instability is nothing new in the global markets. Since the crash of 2008/09, the atmosphere of the financial environment has become changed irrevocably. At first, as the crash took place, it was hard to gauge where it was heading and now, almost a decade later, the effects are here but their direction is difficult to predict.

One of the world-famous experts in this domain, Bill Gross, still took on this ungrateful job and provided his predictions about the future moves on the global market. In a nutshell, he believes that the traditional financial setup, with its current, post-crash form, is slowly pushing investors towards alternatives, including bitcoin. This process, in his view, is ongoing and gaining in speed.

While this might sound strange coming from a billionaire asset manager like Gross, it is only one more voice that is at the same time providing legitimacy to BTC and showcasing a changing world. In this world, there is little doubt that bitcoin holds an exceedingly important place and Gross agrees that the same position with only become bigger in the near future.

Gross was scalding in his analysis of the current state of the markets. According to him, an incapable and ineffective banking culture, along with risky market movements, shows that the investors are wise for reaching out for alternatives. To his note to investors, he said that more and more people like them are going for other options for their capital.

One of these is ancient and is represented by gold, both in as a commodity and bullion. The other one is the complete opposite and takes shape in the form of the most well-known and use cryptocurrency in the world – bitcoin.

The founder of the Pacific Investment Management Co. and the same person, who now heads the Janus Global Unconstrained Bond Fund, called the markets a casino and pointed out that low returns, along with a space of zero-cost debt, could end up pushing investors to take their money out of the same system. While this would bring further destabilization to the same environment, the investors would just be taking precautionary moves aimed to protect their assets.

In the note that was provided to the Janus investors, Gross stated that both bitcoin and other privately defined blockchain tech systems that are set up by some global banks, like the one Santander is working on, is an example of an attempt to stabilize the current asset value in the future purchasing potential.

Even today, bitcoin is widely used to bet online and do much more, but this is minor compared to what it will be used for in a decade from now. Gross believes that a similar role, although less pronounced because it is so low-tech, is the purchase of gold.

A Challenge to the Current System

Using a choice of words that is not often heard from billionaires, especially those in the financial domain, Gross said that the current system is being challenged. This challenge is not coming from a defined adversary that desires to take its place, but by a decentralized set of ideas, mainly seen in the form of the blockchain. Its current manifestation, the bitcoin network, has already shown that it can make a big difference, for example, this summer in China and its market turmoil.

Future iterations of the same FinTech are being developed on an even larger scale and for the first time in history, big corporations and big banking systems are pursuing it vehemently. The first results of these endeavors will be seen in a time frame of a single year or less. In other words, the corporate blockchain has already arrived and entered through the front doors.

While a challenge is always a good thing in a stagnating environment, the immediate implications of this process might be very hurtful for the investors. That is why Gross is both warning the community about this change and calling on it to embrace the challenge and evolve itself. Of course, global banking and finance is not a fast-changing, fast-adapting domain like for example eSports, which is why many are wondering whether the big players really can change their MO.

Gross was very clear on the things he mentioned in his note, but the outflow of the same process was not precisely stated. For the present moment, Gross said that the markets are located in very risky and turbulent position. Not only this, he also expressed a belief that the capitalistic system itself is under threat by the ongoing policies of the national central banks.

He believes that since the crisis of 2008 most if not all of them have taken on a policy of low-interest rates. At the same time, they also pursued a strategy of monetization of debt. In Gross’ view, this is an exceedingly toxic combination that might end up very problematic not only for the same central banks but also for the investors and the entire system on a global scale.

He stopped short before prophesying doom and annihilation of the current market state, but he did finish his note with the thought that the current trajectory cannot end well. For most people in the financial domain, these words probably have a very somber meaning to them.

Evolution of the Markets

While Gross was latently pessimistic about the possibility of change in the greater financial systems, especially central bank, the reality is that this is not completely impossible. As governments begin to develop blockchain tech, so will the banks catch on, even those central ones that move slowly across many years when it comes to any potential change.

However, today, the change is not designed to improve profit margins but to salvage a very threatened system. As Gross mentioned in his note, the need for change goes all the way to the very capitalist setup of most nations in the global exchange of capital. For many, this notion alone might sound like something exceedingly wrong, but the need for evolution is apparent on every level.

Having this potential for change could provide the difference between those systems which end up being smothered by the market instability and those which manage to stay afloat and somehow reinvent their offer to their clients and customers. Bitcoin and blockchain in general look like a smart move for the second group.