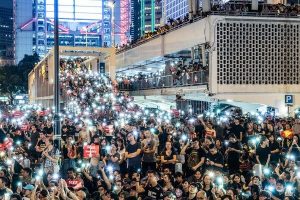 In one of the most politically volatile spots in the world, bitcoin stands a chance to become a hot item in Hong Kong. The political crisis that has been brewing for weeks has finally reached the banking sector. According to numerous reports, the protestors are going to ATMs and withdrawing huge amounts of cash.

This might seem unrelated to the entire p[the process going on in the Chinese territory, but the truth is that is definitely an integral part of the political turmoil. In fact, it stands a chance of opening the next chapter in the struggle between pro-democracy protesters and the government of Hong Kong, as well as Beijing. As this takes place, bitcoin could be one of the entities that come out on top because of this and further developments in this embattled city.

The rush to the Hong Kong ATM machines is no coincidence. It is a set tactic by the protestors that aims to reduce the People’s Bank of China or PBoC influence over the economy of this territory. Protestors stated that their aim is to withdraw as much money as they can in the local currency – which is the Hong Kong dollars or HKG and then exchange their holdings to USD.

This is both to protect their assets but also to show mainland that they are in control of their finances. Now, even though the exchange should turn Hong Kong dollars into US dollars, some in the crypto field see this as a golden opportunity for bitcoin in particular. In that scenario, the rush on the banks could fuel the demand for bitcoin in the city.

For some crypto evangelist, the possibility of the protestors finding a safe haven for their funds in the non-governmental domain could be a very appealing one. This is by no means a certain outcome, but the rush on the banks is not a fictitious scenario. According to some estimates, the amount of money that already left the banks is substantial.

Draining of the Banks

One of the students that started the protest cycle claimed that the protestors already took out a lot of money from the banking sector. The claim showcases a sum of over 700 million Hong Kong dollars. This amounts to almost $90 million and sums like this are not a laughing matter for any banking system.

On the Telegram messaging app that many protestors use, one channel that is dedicated to the protests featured many members showing their ATM receipts. That single channel has over 1,500 members. As protestors and a Hong Kong student stated, the local head of the government Carrie Lam and the government in Beijing care exceedingly about money.

With the run on the banks and the impact on the economy, the Chinese government is bound to feel some worry. The Hong Kong enclave has been a motor of economic growth ever since it became a part of China once again in 1997. In the present economic situation, having to lose that engine would not be in anyone’s interest, especially not for the mainland.

The concept of pressuring the government through the economy has sparked a lot of interest in the mainland as well and opened discussions that are not just pro or against the protest moment. One of the most discussed topics is the possibility of the Hong Kong dollar remaining pegged to the USD in 2019, but after that, a bigger capital outflow, the currency could be damaged.

Still, first and foremost, the protestors need to move their assets into other safe havens and make sure their individual funds are not damaged through this process. This is how bitcoin could play a role if enough of the protestors or those in Hong Kong who want to make sure their money is safe to decide to choose crypto over other fiat options.

Chances are that the Chinese banks will simply push many if not all of their ATMs out of order to stop this process of withdrawal requests. Furthermore, the state has the right to seize any cash that would be present upon an arrest. This means that not only those on the streets that are carrying cash are in danger of seizures, but also those who took the money home.

While the cash could be returned after a legal process, the individual and their family will still have it seized. This opens up a potential inroad for bitcoin as a means of protecting that money even from the police. Some local sources already point out that money interest the bitcoin ecosystem in Hong Kong. LocalBItcoin.com is a peer-to-peer trading marketplace that noted a clear spike in trading from the Hong Kong region.

The same volume took up from the usually KH$3 million to nearly double that sum. This led to rumors that not just the protestors are using bitcoin as a safe haven, but that wealthy individuals and families in the city are doing the same. Their decision might not be fueled by ideological reasons, but it still aided the bitcoin trading spike, naturally if it turns out to be correct.

There is no doubt that some crypto activity is a direct result of the protests in Hong Kong. Local activity on the trading platforms is up and the protestors are mainly young individuals and students. They are by default tech-savvy, having IT students, esports players, online entrepreneurs and the like in their ranks.

They are likely well-aware of bitcoin and other cryptocurrencies and what these can do for them. However, the scope of this process can become relevant only if huge amounts of Hong Kong dollars begin making their way to BTC. This could be the wealthy deciding to move their assets into crypto, but this already took place in China many times and never in the full view of the world as it happened.

But, a moment of that size is needed to make a global difference for bitcoin and the crypto markets. Otherwise, it is just a short-lived exposure for bitcoin use that will quickly be forgotten.