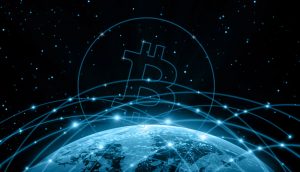 The biggest cryptocurrency in the world, bitcoin, managed to make some huge headway into the world of the traditional finance industry. This happened over the previous six months or the entire 2020 so far. The same process includes some serious traditional investors giving bitcoin their direct backing.

This also naturally reflects itself onto the bitcoin market and the price of its BTC token. After a long period of weak activity during the second part of 2019, the crypto markets as a whole began surging in July. This is now offering both long-term holders and newcomers to the crypto field injection of confidence in bitcoin, but to a similar extent in ethereum and other major digital currencies as well. Expectedly, some big names got caught up in this process as well.

The latest is George Ball, which is the CEO of Sanders Morris Harries, a famous investment firm. He is also the former executive of Prudential Securities. Ball is interesting because he recently changed his stance on bitcoin, turning from an opponent to an advocate. He also brought an interesting and very precise prediction – in his view, the Labor Day in the US, which takes place on September 7, will be a watershed moment. In his mind, a lot of people will rapidly begin turning to bitcoin and adopting it. This will trigger a new influx of users and market capitalization, possibly starting an entirely new bull run.

While George Ball was not a super-prominent opponent of cryptocurrency, blockchain, or bitcoin, at least in the mass media, he maintains that he most definitely shared the same mentality. Presently, however, he is changing that mindset drastically. He recently said that the governments in 2020 do not have the ability to stimulate the markets indefinitely. The start of the global pandemic and what will now certainly be a global economic depression included a lot of money being handed out.

From the famous fiscal stimulus packages in the US to different measures almost everywhere in the world, governments from all possible political backgrounds kept financially supporting a deeply struggling economy. This applies as much to the local governments, big and small, to the huge international institutions like the World Bank and the IMF. Now, Ball sees the problem with the continuation of that process indefinitely. Instead, the financial veteran believes that cryptocurrencies will step into the widening money gap that is steadily forming.

Ball became famous as a Wall Street figure starting in the 1970s and going strong for more than two decades. During that period, he got to the position of a well-known name in this domain, but also kept working in finance long after he was no longer a Wall Street celebrity. Today, he acquired a mass of experience from both good and bad times. This shows him that investors and traders tend to worry about the events that no longer allow for the process of kicking the can down the road. Presently, that means subsidizing individuals in numerous nations, as well as entire businesses, even industries.

That flood of liquidity must end sooner or later, no matter where the money is going. In the US, the stimulus package, which Ball calls smart and well-deserved, is keeping businesses and markets in the game as it tries to offset the damage caused by the COVID-19 coronavirus pandemic. But, the life expectancy of that move is not indefinite. Once it ends, even in the coming future through a notice from the FED, the situation will change and the liquidity will slowly dry up. The same applies to agile industries like esports or entertainment just as much as it rings true for standard businesses like retail. All will be hurt, the question is just how much.

In his analysis, Ball also provided a very precise market for all who are active in the cryptocurrency markets. He believes that the surge of BTC buying will occur after the US Labor Day. This means that the mid-September period will see a big uptick in cryptocurrency market activity. Ball thinks that a huge number of traders are expecting just such an event that would be able to infinite the bull run in the same month and well beyond it. This is why he believes that the traders must react to these slowly forming trends and be ready for the explosion at the end of a long bitcoin fuse. Ball sees that fuse as already on fire, which is why anyone who wants to profit from that jump upwards should have their portfolio ready now or as fast as possible to be able to see big gains later on.

In a nod to the drastically changing financial trading landscape, Ball also referenced the term Robinhooders, who represents the user of the popular app for stock trading. He thinks that they will also have a big impact in that BTC price swings up. Beyond that, he thinks there is a mentality shift that is clear in the same population. Instead of being someone who is determined not to pay taxes or hide their funds, an average Robinhood is a person who wants to attain value outside of a government-defined space.

The same funds will not become worthless if the government currency becomes worthless and offers a level of safety and protection that just was not possible before. In that setup, bitcoin just like any other cryptocurrency becomes valuable both as a long-term safe-have, but also as a speculative bet that is applied short-term. It serves both purposes equally well and the previous decade managed to demonstrate this very clearly.

Change in the Air

The concepts that Ball presented all fall into the category of a big change in the air coming to fruition. In many ways, it is exactly what the early adopters wanted to see in the cryptocurrency community. The same setup is not more evident, even though it got built up with each bull run that the media covered in great detail.

Today, heavy-hitters like Ball can present a vision of the incredibly near future – an event less than a month from now – that could have a huge impact, or at least mark a big change in the crypto markets. That shows just how this change is present in the air.