Opinion The BitCoin Option for Monetizing and Securing Online Videos 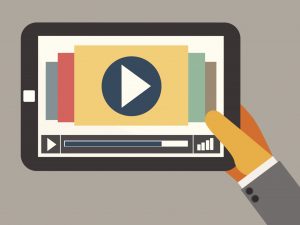 tablet on the hand with video player

As many have predicted a few years ago, it seems that the second half of this decade definitely belongs to the online video format. What was once a cumbersome endeavor that demanded a lot of technical know-how and equipment now has almost completely morphed into a single handheld device. With a smartphone built in the previous year or two, anyone has the full scope of both software and hardware for making videos.

The trend has provided the world with a huge chance in the terms of what type of content social media presents to its users. What was mostly written posts around 2010 and some photo content has moved to mainly visual content with a growing proportion of videos. Fast, the trend is creating an adjacent industry which is bringing in venture capital but also booming from its native profit pipelines.

At the same time, a fast growing group of content providers is also exploding on the scene. These include anyone from eSports streamers and online celebrities to video bloggers and entire teams dedicated to making video content that is being consumed on a global scale. All of them are generating profit using an established set of monetization principles.

But, as this takes place, the process of making money through video is having difficulties scaling up when it comes to everyone included in it. Bitcoin, as a digital currency that started to grow in a similar time period as video established itself as the reigning ruler of content, might be able to provide some interesting options for content providers, along with additional benefits.

A Clash of Titans

At one point, there was a single player in the video area and this was YouTube. As the first major video streaming portal, it managed to get a foothold in the most important sub-domain of social media. It was relatively quickly acquired by Google and transformed into one of the most important websites on the planet.

It quickly gathered a community of content creators and set its own aesthetics, firstly using digital cameras only. As mobile devices and broadband internet catch up, this community stopped being measured in thousands and went to millions, today probably tens of millions. Quickly, Google merged the platform with its AdWords system and offered content creators to earn money from their videos.

For some, this setup generated millions of dollars. Famous YouTube celebrities who manage to regularly push out videos that generate millions of views in a matter of days get a substantial cash flow from YouTube. However, many others who also create valuable content make little to no money of these ads. At the same time, Google aggressive policing of everything it perceives as a threat to their monetization TOS meant that unpleasant surprises are never far away.

Recently, the #YouTubePartyisOver movement came about when the company decided to de-monetize videos that they label as potentially offensive, cutting mostly into the vblogger and gaming communities. As the result, many threatened to leave the platform, especially with Facebook gearing up for its major shift to video where it will provide content creators with 70% of the revenue they make.

However, there is no guarantee that at one point Facebook will not pull a similar stunt. In fact, experience tells us that there is almost a certainty it will do exactly this when the advertising revenue is placed in jeopardy by content makers. In this atmosphere, it is clear that bitcoin could be used to make content providers assess another means of generating money.

The key feature of bitcoin which none of the other monetization mechanisms have is the microtransaction. With it, a video can be valued in any way the content user deems it. For example, a favorite vblogger could ask his or her fans to pay $0.001 every time they view their content. This way, they will make money per views and not on clicks on commercials which are constantly dropping thanks to ad blockers, at least until valid workarounds hit the market.

Best of all, it would be the users who control how much they pay for a viewing of a video. Every one of these transactions will be completed immediately and knowing the financial landscape in which many of the modern content providers are located, BTC will never have to leave its primary digital form and be converted into some traditional currency. Instead, the content providers could use it to purchase equipment, ads for their new videos or anything else they might need, as simple and easy as it is for people today to bet online using bitcoin.

Integrating bitcoin network with any of the current platforms should be exceedingly easy, even though right now no social media would go for this option. However, it has been demonstrated that even very hostile parties to this digital currency have had a huge change of heart.

Another huge issue for content providers is copyright and the long-term value of their product. Recently, a huge uproar was seen because of the fact that people kept stealing videos from Youtubers and posting them on Facebook videos as their own. In this case, the legal safety net of both social giants failed the providers who were left without any compensation for their work.

Using the bitcoin blockchain for videos as a means of watermarking them would do wonders for authenticity protection. This way, a person could determine who made the video and where did it originated from when they started circulating online.

Here, basically the same principle as that provided for tracking illegal guns could be used and this would have a huge deterrent purpose first and foremost. But, if the system would end up being integrated on social media along with the monetization mechanisms, it would end any chance of people ripping off the work of others and using it for their own gains.

Currently, each social media that utilizes video in a big way fights tooth and nail to secure their revenue streams. Because of this, there’s no chance of introducing bitcoin to them in a low-key manner that would fly under the radar. For this to work, having the blessing of the networks is not only paramount but practically the only way this could get off the ground.

However, for this to happen, these networks have to be persuaded that bitcoin covers their own interests and boosts their chances for better revenue. While this is logical, making the social media executives accept this as something they should exert money and effort will most likely be very challenging.