Opinion Could Bitcoin be used to Mend Southern Europe’s Economy? 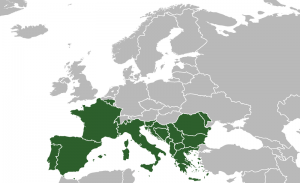 Europe did not have a great couple of previous years, especially when it comes to the EU. With the upheaval in the east of the continent, where Ukraine and its separatist region is waging war and the constant economic problems of many EU member states, the period after the 2008/09 global crisis was not cushioned on the Old continent.

2015/2016 just amplified the already bad period with the introduction of the refugee and migrant waves that flooded the southern EU borders and for now, the process culminated with Brexit and the withdrawal of the UK from the European block. Never since the end of the WW2 has the unified European dream been in such a state of uncertainty.

While it seems that the crisis is overflowing the entire EU, the fact remains that the southern nations, mainly Greece and to a lesser extent Italy and Spain, are in a state of drastic economic hardships. Not only are the current problems very serious, they also come in a climate of a lack of any viable ideas. Instead, the governing bodies, whether they are industrial, financial or political, appear willing only to postpone a complete crash and kick the can further down the road.

In this type of an environment, is there a possibility that a completely new element in the financial domain could be able to change the situation for the better? Mainly, could the resurgent bitcoin have what it takes to make a difference in the southern Europe? Here are some of the key facts related to the same idea and also the way they interact with each other.

A Long Line of Problems

In many ways, it might seem that the situation that has befallen the nations of the northern Mediterranean started centuries ago. Greece, the most famous of the problematic economies, was so much in debt in the late 19th century that an expression came out of it which is still in use around the Balkan region. Back then, as it is today, the country always apparently managed to use its political position to come into possession of foreign funds in the form of loans, which it had then struggled to pay back.

Today, it has almost no chance of repaying even a fraction of the money it owns to the wide range of different lenders. But, like it was before, Greece is not a fringe nation but an integral part of the EU and to make matters even worse, the Euro block. Because of this, through a subsequent set of years following the start of the crisis, Greece was near the point where it was ready to declare national bankruptcy.

Instead of allowing this to happen, the EU governance decided to provide a bailout for Athens which did not really solve anything, just put off the complete collapse and an eventual Grexit from the Euro. Italy and Spain, while all have different individual genesis of their current economic outlook, still remain locked in a quagmire of debt and low national productivity.

For everyone in these nations, the time on the clock remains to tick towards an unknown but certainly bad result. Essentially, it would place them in a situation where the best case scenario would be a recession in its current levels. Every other option would be either worse or a lot worse.

A New Way of Thinking

The problems facing the southern EU block are so huge that the combined might of Brussels did not manage to solve them even by a long shot. Is it then too bold to think that a single digital currency like bitcoin, which is otherwise used for many things like online betting and other direct end-user activities, could make a difference?

Well, in theory at least, bitcoin is exactly the thing a country like Greece would need to jump start it economy. By being able to modify regulations quickly for the sake of generating potential business opportunities, Athens could make itself and other cities like Thessaloniki potential hubs of bitcoin development. This is feasible because there of their position of a fully-fledged EU member which at the same time can simply turn public sentiment towards any incentive that could improve the lives of ordinary citizens.

On the other side of the equation, business and development leaders from the bitcoin community would most likely jump at the opportunity to get an EU foothold, which is happening even now, but on a very modest scale and in many ways, using the long way around. A position in Greece, Italy or Spain would place them smack in the middle of the Euro block.

At the same time, there would be other benefits – thanks to the baseline economic state, running an IT-related business in a country like Greece is very cost effective while it makes for a great recruitment pitch. For developers in a large number of other countries, getting an opportunity to work in Greece, with its tourist and leisure potential could be a dream come true.

Bitcoin is just one piece of the recovery solution these countries could utilize. While the chance of it generating the entire push might be slim, there is a certainty this will have to happen through some form of digital enterprise. The days when one of bigger exports from Greece was ships are long gone and they will not come back for the current generation.

Instead, its citizens and leaders have to look for things that are geared towards its endless potential: tourism, agriculture, and digital ventures. The same goes for the people of Spain, Italy and potentially even their northern neighbors. In all of these, the digital side is substantially underdeveloped. Here, things like attracting bitcoin developers should be included in a wider digital push – here, any idea or approach should be tried out, starting with things like eSports and going all the way to the most cutting-edge digital markets.

The state of the same nations is dire and they are in a place where bold ideas have to be tried out. Whether or not bitcoin could really change these countries is questionable, but there is no doubt that a new, digital-first economic outlook has to be utilized if they are to stand any chance of a recovery.