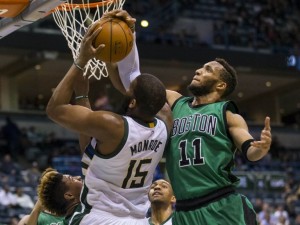 Boston Celtics will be looking to extend their winning run to eight games when they host New Orleans Pelicans at their TD Garden. Pelicans aim to build on a hard-fought victory over New York Knicks, but they will have a much bigger fish to fry in Tuesday’s game against Brad Stevens’ troops.

Despite the fact that summer acquisition Gordon Hayward suffered a serious injury at the start of the season, Boston Celtics have been producing thrilling performances in the 2017/2018 NBA campaign. Last season’s key player Isaiah Thomas has not been sorely missed and Celtics are on the right track to clinch top position in the Eastern Conference. Brad Stevens’ men have been in a splendid form of late and they are on a seven-game winning run ahead of the visit of New Orleans Pelicans. Kyrie Irving is playing main role in Brad Stevens’ team and the former Cleveland Cavaliers superstar has been averaging 24 points this season. Boston are tough to beat at home and you should bear in mind that they are after their fifth consecutive win at their TD Garden.

Both Al Horford and Jayson Tatum should recover in time to face New Orleans Pelicans, whilst Shane Larkin is rated doubtful. Gordon Hayword remains in the recovery room (leg).

New Orleans Pelicans were on the verge of suffering a loss to New York Knicks at the weekend, but they eventually came from 19 points behind to beat Jeff Hornacek’s troops at Madison Square Garden. New Orleans sit in sixth position in the Western Conference ahead of the trip to Boston, but they will have to be at their sharpest in the remainder of the season if they are to book their place in the NBA play-offs. Pelicans have been anything but impressive on the travels this season and it has to be noted that they have already suffered 11 defeats on the road. Alvin Gentry’s team are seen as underdog in Tuesday’s clash and despite the fact that they were beaten by Celtics in each of their last three meetings in Boston, the visitors should not be written off just yet. A man to watch in the away team will be Anthony Davis, who scored no less than 48 points in the 123-118 victory over New York Knicks.

Jameer Nelson has joined the likes of Solomon Hill, Frank Jackson, Alexis Ajinca and Tony Allen in the recovery room, but coach Alvin Gentry has no other selection worries.

Boston Celtics have been producing terrific displays in NBA of late and seeing that Al Horford should be fit to face New Orleans Pelicans, I am tempted to put my money on the in-form hosts. Anthony Davis and Co. are not regarded as good travelers and, taking everything into account, they are likely to return home empty-handed.