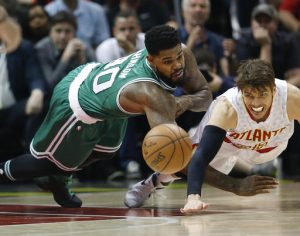 Boston Celtics will be looking to get their job done in the tie against Philadelphia 76ers when the two teams take on each other at TD Garden on Wednesday. Philadelphia face a do-or-die situation in this one and an entertaining clash is on the cards.

No Kyrie, no problem

Boston Celtics are hit by injuries, but despite the fact that the likes of Gordon Hayward, Kyrie Irving, Daniel Theis and Shane Larkin remain in the recovery room, Brad Stevens’ men are on the verge of beating Philadelphia 76ers in the Eastern Conference semis. Celtics are leading the series 3-1 and they are on the verge of booking their place in the conference final. It is well known that Boston are a real force to be reckoned with at home, but coach Brad Stevens must warn his men against complacency. Tatum, who scored 20 points in a 103-92 loss to Philadelphia in Game 4, will be the man to watch in the home team. Kyrie Irving has not been sorely missed in the play-offs and you should bear in mind that Celtics are eyeing their sixth consecutive win at home in NBA.

Aforementioned quartet Gordon Hayward, Kyrie Irving, Daniel Theis and Shane Larkin misses the match with injury, but coach Brad Stevens has no other injury worries ahead of Game 5.

Philadelphia 76ers desperately needed a win in Game 4 and they managed to get one. Brett Brown’s men defeated Boston Celtics 103-92 in front of home fans, but they should not stop now. Philadelphia face yet another must-win situation against Celtics on Wednesday and they are likely to leave their hearts on the field. Dario Saric led 76ers to the triumph in Game, with Joel Embiid adding 15 points and 13 rebounds. Philadelphia, though, were beaten by Boston in previous two meetings between the two teams at TD Garden and that is the main reason why many people considered them underdogs in Wednesday’s clash. Ben Simmons scored 19 points in the 103-92 triumph over Celtics and he is likely to pose a big threat for the hosts in Game 4. Simmons has been averaging 15.8 points this and, to make things even better, 8.2 assists this term. However, the fact that Philadelphia suffered 14 losses in last 15 meetings with Boston at TD Garden is not giving fans a reason for optimism.

Timothe Luwawu is sidelined with a knee injury, but coach Brett Brown has no other selection worries and he is unlikely to make changes to the starting line-up.

Boston Celtics have been producing thrilling displays in the play-offs and despite the fact that they face Philadelphia 76ers with a severely-weakened roster; I am tempted to put my money on Brad Stevens’ men. Boston do not suit Philadelphia and I believe that the visitors are going to return home empty-handed.