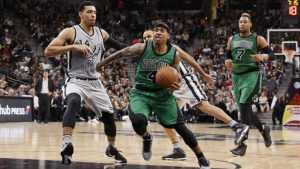 Boston Celtics look unstoppable at the moment. Brad Stevens’ team are eyeing their fourth consecutive win in the league, but they will have a big fish to fry in Friday’s clash against San Antonio Spurs, who are determined to regain the NBA trophy.

Boston Celtics suffered a heavy 104-88 loss to star-studded Golden State Warriors earlier in November, but it has to be noted that coach Brad Stevens could not count on several starters for the clash against the last season’s runners-up. Al Horford has overcome his injury and Celtics have been impressive in NBA ever since he returned to contention. Thanks to a 111-92 victory over Brooklyn Nets Boston extend their winning run in the league to three games, but Friday’s encounter against San Antonio Spurs will be anything but a walk in the park for the hosts. Isaiah Thomas is the team’s top scorer and he will certainly play an important role in Brad Stevens’ team in the game against Spurs. You should have in mind that the left-handed point guard has been averaging 26.2 points this season.

Aforementioned star player Al Horford is fit, meaning that coach Brad Stevens can count on all of his key players for the San Antonio Spurs game.

Seven wins in a row

San Antonios Spurs failed to impress in the 2015/2016 NBA play-offs and, as a result, the club chiefs decided to sign Spanish center Pau Gasol. Gregg Popovich’s men have suffered only three defeats in the league this term and they are on a seven-game winning run ahead of the trip to Boston. San Antonio came from behind to beat Charlotte Hornets at Time Warner Cable Arena on Wednesday (119-114), with Kawhi Leonard scoring 30 points, while adding four assists. Leonard is undisputedly the team’s key player and, no doubt, he will take a lot of shots if Friday’s clash against Boston Celtics. Unlikely last season, Spurs have been impressive on the road in the 2016/2017 NBA campaign and they will be looking to keep their 100% record intact with a victory over Boston Celtics. Gregg Popovich’s men were beaten by Celtics in the Utah Summer league clash in July, meaning that the visitors are hungry for revenge.

Nicolas Laprovittola (teeth) and Dewayne Dedmon (knee) are both rated doubtful and the duo will be assessed on the match day. Coach Gregg Popovich has no other selection worries ahead of the match.

Both Boston Celtics and San Antonio Spurs have been in a splendid form of late, but I believe that Gregg Popovich’s troops are more of a team. Spurs have been producing outstanding showings on the road this season and seeing that they defeated Celtics in previous six meetings between the two teams in Boston, there is every chance the visitors will emerge triumphant in Friday’s showdown.