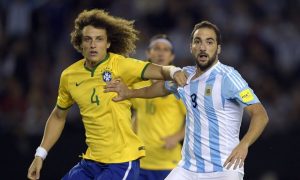 These two sides have met on average every couple of years since 1950. In total, they have played out 40 matches in which Brazil won 23 times and Mexico won 10 times. They also played seven draws. In their last 10 head to head games, Brazil won five times, Mexico four times and there was that one draw in the last World Cup.

Both teams had problems in the group stage. But none of that matters in this match. It’s a different game and Brazil and Mexico both must perform better.

Felipe Luis will probably play in this game instead of Danilo, who was injured against Serbia. Coutinho will look to add to his two goals, while Neymar, who has been criticized by players from other teams for his theatrics, will want to silence them.

Hector Moreno from the Mexican team is serving his one-match suspension but otherwise, Coach Osorio is not looking to make any changes.

Brazil haven’t had it easy in the group stage even if some thought they would ease through to the knockout stage. They created a lot of chances, 56 to be exact. But they converted only five. They allowed to Switzerland to come back and earn a point, scored two goals in stoppage time against Costa Rica and were out to the test by Serbia.

Question is, when will the real Brazil team turn up? Mexico knows them well and will not give them much respect. Brazil must step up their game and have a good game. They are favorites to win the World Cup, they just need to show it on the field.

Mexico finished 2nd in the group with two wins and six points but with a negative goal difference. They survived 25 shots at goal and the ball hitting the woodwork twice against Germany before sneaking a goal in to win. They didn’t impress against the Koreans.

They have never gone past the 1/8 finals in the World Cup. They are fired up to change all that against Brazil. They know they are outsiders and will play without pressure. Why not send Brazil home and stop them reaching the quarter-finals for only the second time ever?

Yesterday, and even in the group stages, we’ve seen that, in the World Cup, anything is possible and there are no clear favorites. However, Brazil really are favorites here and it will take a major effort by the Mexicans to overcome those odds.

Mexico are yet to score against Brazil in the World Cup. So, it might be a good idea to bet on Mexico to score and Brazil to win the match.

History tells us that Brazil goes through the gears in these tournaments and that they get better the more they play. Barring that one game against Germany four years, this has always been the case. Mexico is the underdog but if they win, it would be one of the biggest upsets in World Cup history.