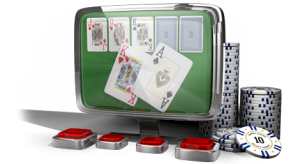 If you know roughly how to play poker, but you’re not entirely convinced in your own skills to sit at a poker table and play with the best, then video poker may be for you. Video poker is not played against any other competitor, nor is it played against the dealer.

In video poker, you must simply construct the best hand that you can to win cash prizes. If you have a rough grasp of how to play, or even if you don’t, then this guide is perfect for you.

As with all poker games, the first thing that you need to do is place a bet. Bets in video poker are relatively straight forward to make. All you have to do is simply click on the coin button to increase your bet to the amount you wish to play. On occasion, you can bet more than one coin per hand, and this will give you larger sums of cash to win, as the paytable which displays the winning hands will reveal.

Play Video Poker For BitCoin at These Casinos:

After your bet is made, you can click on the deal button to get your first hand. You will notice in most video poker games that the computer has decided which cards it thinks you should keep. You can overrule it, if you wish. Simply click on the cards that you think will serve your best.

Any cards which are not held, can then be discarded by clicking on the draw button. The draw button also gives you fresh cards to replace those which you have dropped.

Once you have received your second set of cards (if you wish to take any that is), your poker hand will be complete. This will then be measured against the pay-table, to determine if you have a winning hand. If you do, you’ll then be paid out your winnings. If you don’t, then you won’t.

The value of the hands

The order of the hands is pretty standardized in video poker. The lowest paying hand tends to be a pair of Jacks or Better (although in some games, this can be 10s or better). This hand is outranked by a Two Pair (two pairs of two cards with the same value). This hand can be bettered by a Three of a Kind (three cards of the same value).

The only hand that will trump them, is a Royal Flush. This hard to get hand requires players to have a 10, Jack, Queen, King and an Ace all in the same suit.

In the case of the latter, additional hands become available to win with, such as 5 of a Kind (four cards of the same value, plus a wild) and an Unnatural Royal Flush (a Royal Flush with a wild substituting for one card), amongst others.

There is no one pay-table for video poker pay-outs, since each game has its own rules regarding pay-outs. Generally speaking, the big cash prize is reserved for the Royal Flush, whilst players will win their money back if they get the lowest hand on the pay-table.

You can normally win 2x, 3x, 4x or 5x the normal rate of pay, if you choose to play video poker with 2, 3, 4 or 5 coin bets, as opposed to the normal one-coin bet. Typically, a Royal Flush in video poker is worth roughly 250x the starting bet.

If you fancy using your Bitcoins to play video poker, then there is really only one place you should do it. We’d heartily recommend mBit Casino to you, since they have a good range of video poker games for you to play, as well as many other top casino titles; all of which you can play with deposits made via Bitcoins.