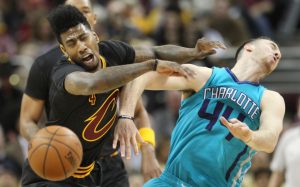 Following a hard-fought win over Boston Celtics, Cleveland Cavaliers take on Charlotte Hornets at Time Warner Cable Arena in their last match in 2016. Cavs aim to cement top position in the Eastern Conference, but Hornets are tough to beat at home.

Charlotte Hornets have been producing scintillating displays in the NBA this season. Hornets occupy fourth position in the Eastern Conference ahead of the visit of Cleveland and they recorded five wins in previous six league games. Steve Clifford’s troops have been impressive at their Time Warner Cable Arena of late and they are eyeing their sixth straight win in front of home fans. Charlotte produced a brilliant defensive performance in a 91-82 win over Miami Heat and, on the other hand, key players Kemba Walker and Nicolas Batum scored 38 points between each other. Nonetheless, Hornets face an uphill task in Saturday’s game against the title holders and they will have to be at their sharpest if they are to upset “the King James” and Co. in their last game of the year. Charlotte suffered a loss in each of previous five encounters against Cleveland and, no doubt, they are desperate to put an end to the negative trend.

Marco Belinelli is likely to miss the match with an ankle injury, but coach Steve Clifford has no other selection worries ahead of Saturday’s clash.

“The King” is back

Cleveland Cavaliers did remarkably well to beat Golden State Warriors at their Quicken Loans Arena a week ago, but they suffered a 106-90 defeat to Detroit Pistons in their last away game in the league. However, it has to be noted that key player LeBron James was rested against Pistons and that is the main reason why Tyronn Lue’s charges failed to record their eighth away win of the season. “The King James” returned to contention against Boston Celtics and, as a result, Cavs defeated Brad Stevens’ men on Thursday. Cleveland have been producing terrific showings at home this season, but their away displays leave a lot to be desired. Cavs have already suffered five losses on the travels, meaning that they will fight tooth and nail against Celtics in order to start a new winning run on the road. Both Kyrie Irving (32 pts) and Kevin Love (30 pts) impressed in the 124-118 win over Boston Celtics and the duo is likely to make life difficult for Hornets, alongside LeBron James.

J.R. Smith is sidelined with a thumb injury, while Chris Andersen has yet to overcome a knee problem. The duo remains in the recovery room, but coach Tyronn Lue has no fresh injury worries ahead of the Charlotte game.

Charlotte Hornets are a real force to be reckoned with at home, but beating the NBA champions is easier said than done. Cavaliers failed to impress in the defeat to Detroit Pistons in their last away game in the league and I am positive that coach Tyronn Lue is not going to rest his key players this time out. Hornets suit Cavs and I believe that away win should be considered.