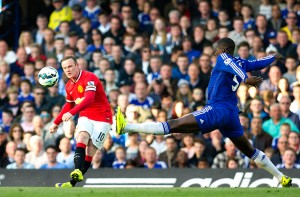 Chelsea and Manchester City face each other at Stamford Bridge in the Premier League derby. The Blues aim to build on a thrilling 4-0 win over Stoke City, but the Citizens have been scoring goals for fun of late and a lively contest appears on the cards.

Many people expected that Diego Costa would be sorely missed in the 2017/2018 Premier League campaign, but his replacement and fellow Spaniard Alvaro Morata has been impressive in front of goal at the start of the season. The summer signing has already netted six goals in the English top flight and all eyes will be on him when Chelsea face Manchester City at their Stamford Bridge on Saturday afternoon. Eden Hazard returned to the starting line-up in the Champions League clash against Atletico Madrid and seeing that the Belgian ace produced a fine display in the 2-1 win over los Rojiblancos, he is likely to keep his place in the starting XI. Anyhow, Chelsea are a real force to be reckoned with at home and they are definitely capable of beating Man City on day 7 of the new Premier League campaign. It has to be noted that Antonio Conte’s men are eyeing their fourth consecutive win in all competitions.

David Luiz is sidelined through suspension, whilst Danny Drinkwater misses the match with injury. Coach Antonio Conte has no fresh injury worries ahead of Saturday’s derby.

Manchester City failed to win the Premier League trophy last season and, as a result, the club chiefs decided to reinforce the squad in the summer transfer window. New signings have already adapted to the new surroundings and the Citizens have been scoring goals for fun in the national championship this term. Pep Guardiola’s men rolled over Crystal Palace in their last league match and they are certainly brimming with confidence ahead of the trip to London. Kun Aguero seems to be on top of his game at the moment, but he could miss the Chelsea game with injury. In his absence, Gabriel Jesus is widely expected to lead the line for the visitors. Kevin de Bruyne plays a very important role in Pep Guardiola’s team as well and he will be yet another man to watch in the away team. Man City are likely to stick to their attacking style of play against Chelsea, but beating Antonio Conte’s men on the road is easier said than done.

Kun Aguero is unlikely to be risked, whilst full-back Benjamin Mendy is definitely out of contention with injury. Vincent Kompany has recovered in time to face Chelsea.

Both Chelsea and Manchester City have been in a terrific form of late and there is every chance fans will see goals galore at Etihad Stadium. Both sides are likely to go for a win in Saturday’s showdown and, taking everything into account, both teams to score bet should be considered.