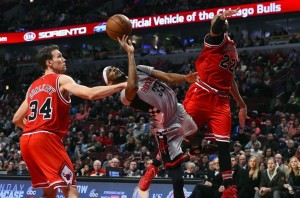 Having crushed Detroit Pistons on Monday, Chicago Bulls will be looking to give fans yet another reason for celebration when they take on Washington Wizards, who were more than unfortunate not to beat Indiana Pacers at Bankers Life Fieldhouse.

Following back-to-back defeats to the likes of Minnesota Timberwolves and Milwaukee Bucks, Chicago Bulls recorded a 113-82 win over Detroit Pistons in their last league game. Fred Hoiberg’s men occupy sixth place in the Eastern Conference, but they are level on victories with Atlanta, who are not sitting in the play-offs berth. Chicago Bulls need to keep on improving their game if they are to book their place in the NBA play-offs and coach Fred Hoiberg is certainly aware of what could happen if his men suffer yet another dip in form. Jimmy Butler failed to impress in a 69-95 loss to Milwaukee Bucks, but the pacey point guard scored 19 points and added six assists in the 113-82 victory over Detroit Pistons. Dwayne Wade has been averaging 19.3 points per game this season and he will be yet another man to watch in the home team in Wednesday’s game against Washington Wizards.

Michael Carter-Williams remains in the recovery room. He has yet to overcome a knee injury and he is likely to return to contention in January. Coach Fred Hoiberg has no other injury concerns.

Against all odds, Washington Wizards outplayed Los Angeles Clippers at home on Sunday and they produced a fine performance in Monday’s game against Indiana Pacers. However, Bradley Beal missed a potential winning three-pointer in the dying seconds of the match and, as a result, Pacers put an end to Washington’s three game winning run in the league. It is more than obvious that Wizards’ away displays leave a lot to be desired and it has to be noted that the capital club suffered four defeats in previous five away matches in NBA. Scott Brooks’ troops aim to move a little closer to the play-off places, but beating Chicago on the road is easier said than done. Aforementioned point guard Bradley Beal has been in a thrilling form of late and he is likely to prove a handful for Bulls. John Wall has been averaging 23.7 points this season and he is likely to play an important role in Scott Brooks’ team in Wednesday’s clash as well.

Center Ian Mahinmi is sidelined with a knee problem, while Danuel House misses the trip to Chicago with a wrist injury. Sheldon McClellan did not enter the court against Indiana (coach decisions), but he could play some part in Wednesday’s game.

Wednesday’s game at United Center pits together Chicago Bulls and Washington Wizards, the two teams who are tough to beat at home. The capital club have been struggling on the travels of late and seeing that Bulls rolled over Detroit Pistons on Monday, home win appears on the horizon.