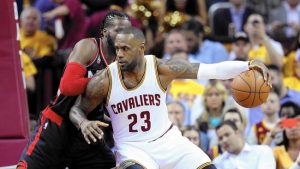 Having upset Cleveland Cavaliers in Game 3, Boston Celtics will be looking to claim yet another major scalp when they face LeBron James and Co. at Quicken Loans
Arena on Tuesday evening.

Despite being regarded as big favourites to win Sunday’s clash against Thomas-less Boston, Cleveland Cavaliers suffered a shocking 111-108 defeat to Celtics in front of home fans. Cavs, though, still have home court advantage and they will be looking to take a 3-1 lead in the series against Celtics when the two teams face each other at Quicken Loans Arena on Tuesday night. LeBron James impressed in first two games of the tie, but the “King James” scored only 11 points in the 111-108 loss to Brad Stevens’ troops. Kyrie Irving and Kevin Love scored 77 points between each other in Game 3 and the duo is likely to pose a big threat for Celtics in Tuesday’s showdown. Cavs are eager to set up yet another meeting with Golden State Warriors in the NBA final and there is every chance the hosts will leave their hearts on the court in Game 4.

Walter Tavares is out of contention with injury, but coach Tyronn Lue has no other injury concerns ahead of Tuesday’s game. There are no suspended players in the home team.

Boston Celtics key player Isaiah Thomas suffered an injury in Game 2 and, as a result, he missed Sunday’s encounter against Cleveland Cavaliers. However, despite playing without their top scorer in Game 3, Brad Stevens’ troops outplayed Cavs at Quicken Loans Arena. Boston regained a much-needed confidence, but recording back-to-back victories over Cleveland on the road is easier said than done. Celtics improved defensively in Game 3, with the team managing to prevent Cavs from scoring more than 110 points and they are likely to rely on their defence in Tuesday’s clash. In Isaiah Thomas’ absence, Avery Bradley will be the man to watch in the away team. Bradley scored 20 points in the 111-108 victory over Cavs, with Marcus Smart adding 27 points. Boston Celtics did defeat Cavaliers at Quicken Loans Arena in Game 3, but it has to be noted that they suffered a loss in each of their three meetings with Washington at Verizon Center.

Amir Johnson is a major doubt and he will be assessed on the match day. Isaiah Thomas is unlikely to recover in time to face Cleveland Cavaliers in Game 4.

Cleveland Cavaliers were not on top of their game in Sunday’s encounter against Celtics and, no doubt, the reigning champions are going to take Game 4 very seriously. Boston Celtics superstar Isaiah Thomas is likely to miss the match with injury and, taking everything into account, I do not believe that the visitors are going to record yet another shocking win over Tyronn Lue’s charges.