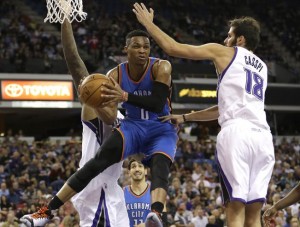 Cleveland Cavaliers will be looking to bounce back from a shocking loss to New Orleans Pelicans when they take on Sacramento Kings at their Quicken Loans Arena. Cavs recorded only one win in previous four games in NBA, meaning that this has to go down as a must-win match for the hosts.

Cleveland Cavaliers were totally outclassed by Golden State Warriors at Oracle Arena (96-121) earlier in January, but they quickly returned to winning ways, with the team beating Phoenix Suns 118-103 at home. Nonetheless, following a loss to San Antonio Spurs in overtime Cavs were beaten by New Orleans Pelicans as well. Tyronn Lue’s men do not seem to be on top of their game at the moment, but they are sitting in top position in the Eastern Conference ahead of the visit of Sacramento Kings. Kyrie Irving scored 49 points in the 124-122 loss to New Orleans Pelicans and he is definitely capable of making life difficult for Kings on Wednesday evening. Cleveland Cavaliers are eyeing their 20th home win of the season, but they will have to prove their worth on the court. LeBron James and Co. need to take the game very seriously as they can’t afford to lose yet another match in January.

J.R. Smith is sidelined with a thumb injury and he will return to contention in March, whilst Chris Andersen is out for the rest of the season with a knee problem.

Sacramento Kings suffered a 108-120 defeat to Cleveland Cavaliers earlier in January, meaning that the visitors are eager to get their revenge on the title holders. Thanks to a 109-104 victory over Detroit Pistons Kings put an end to their five-match losing run in the league, but they need to keep on raising their form if they are to book their place in the Western Conference play-offs. Dave Joerger’s troops face an uphill task in Wednesday’s game against Cleveland Cavaliers, but Tyronn Lue’s men have been totally out of form of late and the visitors need to take advantage of the situation. As always, a man to watch in the away team will be DeMarcus Cousins, who has been averaging 28 points this season. Boogie scored 55 points in total in previous two meetings between Kings and Cavs, but beating the reigning champions without Rudy Gay in the starting line-up is easier said than done.

Rudy Gay’s season is finished after he suffered a full rupture of his left Achilles tendon. Omer Casspi is yet another absentee in the away side as the Israel international misses the match with a calf injury.

Cleveland Cavaliers aim to start a new winning run in the league. The defending champions did not take Hornets seriously, but I am positive that they will leave their hearts on the court in Wednesday’s clash against Sacramento Kings, who are not regarded as good travelers.