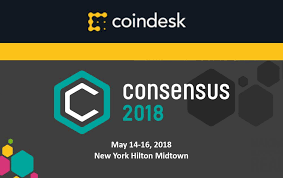 CoinDesk’s Consensus conference is the biggest event in the crypto ecosystem for several years in a row. It was designed to provide a platform for the industry and its professionals as the marketplace for the still young business and tech avenue continues to grow.

However, after several very successful years in terms of propping up the crypto prices, many were hoping and even counting that this would take place once again. 2018 proved to be a year when CoinDesk’s Consensus did not deliver anything in the ballpark of that.

Instead, the sell-off seems to be continuing with bitcoin and other major cryptocurrencies reaching their lowest level in a month or more. As this unfolds, the issues become clear – do events like Consensus provide any relevant impact on the crypto markets or are they just a relic of a bygone era when they did wield some true influence?

In the days ahead of the conference, Twitter, the social media of choice for the members of the cryptocurrency community, was alive with activity. There, many industry experts and those who were active in the same field began stating that the hike in the crypto process is inbound.

Many openly and constantly predicted that the prices would rise as the conference got underway and some even doubled down on this during the conference. While no one can tell for sure how many people were listening, there is no denying that the message was being transmitted loud and clear at every possible opportunity.

It said – crypto prices will have a bull breakout, just wait and see. After the conference ends, the value will begin to rise sharply and this will take place across the board.

Sadly for the optimists and the cryptocurrency evangelist, cryptocurrency market did not listen to their prediction. Instead, the prices fell after the conference. Estimates show that combined market cap dropped by $45 billion during the week after the Consensus.

The same drop was evident in all of the major cryptocurrencies. These include bitcoin, ripple, ethereum, litecoin and virtually every other cryptocurrency including the just-launched small-scale altcoins.

Now, in the light of this event, there is a new reality check that has emerged. Not only were the evangelists wrong in their predictions, they were also unable to sway the opinion of the potential investors who could make their prophecies into reality.

With this in mind, the question arises – are the evangelists preaching to each other and no one else is listening? Or did just most of them simply burn out their influence and ended up being figures that people readily ignore? Any of these answers is unnerving for the current cryptocurrency investors.

The ugly truth is that new adopters are needed for the price rise to not just materialize but also come about in any relevant manner. Without the new adopters, the market includes a majority of investors who are well versed in the movements of the crypto prices.

Right now, it is most likely that these are just moving their profits out of the market or playing on the bear wave. When the new price hike comes about, they will produce a similar move, never really propping up the market with huge additional investment.

For the second to happen, brand new investors must begin pouring fiat currency into the crypto domain. This is similar to the general concept of the industrial growth – for it to be attained, new investment sources must come around and kick-start the gears of profit-making. As long as that injection of investment is not there, the growth will continue to be small or completely nonexistent.

Currently, some analysts are arguing that the exact opposite of the previous big wins in 2017 is happening. Back then, the appearance of bitcoin futures was generating an incredible amount of buzz and hype around cryptocurrencies.

During this period, the huge influx of altcoins also made an impact and resulted in even more people rushing into the cryptomarket, all trying to buy the new bitcoin with their spare savings. Cumulatively, this led to a huge amount of fiat money rushing into the market, divided between the big crypto names and a slew of new altcoins.

Strangely, the growth of the later 2017 was generated by a lack of knowledge of the users who tried to catch the lightning in the same way someone did in 2010 when they invested in some almost unknown phenomena of bitcoin.

But, this way of thinking is similar to the idea of digging for gold in a deserted mine shaft that had a gold line 100 years before. For most, the results, at least for now, are equally effective – no altcoin has so far managed to generate a market position of any meaningful value. Being similar to bitcoin is a wild dream for all of them, yet millions still have these portfolios and they do not know what to do with them.

A lot of things are needed for true growth in prices and general cryptocurrency values. Firstly, the evangelists must accept that their sermons are not delivering good results. They are not reaching to the new adopters and the current ones are not doubling down on their investment. Instead, it looks like most are going about, stating their usual talking points and the results are nowhere to be seen.

Secondly, the issue of events like CoinDesk Consensus is not for them to take place and result in the price increase. Instead, companies and startups have to provide something of value to the public and also something that is a true innovation.

The same is absolutely true for so many ventures, especially digital ones. For example, an eSports conference will not expect to have millions of new players flocking to the game just because the event took place. Instead, something of value must be provided there or via some other means.

Right now, it appears that the crypto community is low on the actual positive news and is trying to conceive new adopters with the same old arguments. This has to change is the cryptocurrency values near those in late 2017 are ever to be seen again.