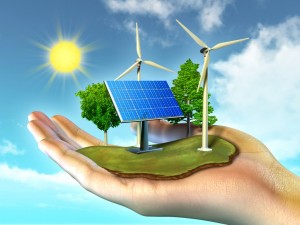 The notion that cryptocurrency (especially BitCoin) and energy production are somehow connected is not a new idea. Ever since the P2P network that is BitCoin entered the global currency and finance markets little less than a decade ago, its basic concept was directly tied into the idea of using energy as a currency foundation.

Instead of residing on the gold standard or the economic capacity of a certain nation, BitCoin functions by basing itself on the hashing power of the computers involved in its operations.

In fact, hashing power is nothing more than computers and their processing potential, but more than that, it is the energy consumption needed for the process of verifying all transactions that take place in the network.

As the network expanded, the amount of power needed for hashing purposes grew, just like the needed hardware became ever more potent. This process continues but makes any BTC mining endeavor much more costly and less able to generate large profit margins.

That is why many felt, even at the beginning phases of this digital currency that the answer might lie in the green energy production. These energy sources, thanks to their renewable nature, seem like the ideal partners to a BTC mine that could use the same energy and transform it immediately into profit, instead of having to sell it to the power companies.

But, the connection between renewable energy sources and BitCoin mining is a lot more complex that it seems at first, especially when it comes to the most popular alternative of wind and solar.

Sun provides an endless amount of free energy, but for over a generation, harnessing that energy turned out to be more of a challenge than expected. When it comes to BitCoin mining, the problem of the rest of the energy sector remains the same – how to generate power in a cost effective manner?

Here, the main issue is the idea that the electrical energy is generated using solar panels, which convert Sun’s radiation into electrical current. However, this only works during day hours and even then the current is transferred to a battery pack which acts as a storage unit for the generated power.

The same units are expensive, potential polluters (because of a heavy presence of toxic chemicals in practically all batteries) and need to be replaced periodically, making any solar generating power plant less profitable. In the previous 20 years, in spite of a revolution in the IT sector, the domain of battery potential and price remained elusive when it comes to huge breakthroughs, including the upcoming Tesla Powerwall product.

This is why even today solar panels remain auxiliary power sources, which are used in conjunction with a traditional access to a power grid. This means that a BitCoin mine could profit from a solar plant only as a way of lessening the load on the existing power bills.

However, there is an alternative in the way of using solar and thermal powers as a combination. In this case, there are no solar panels, but instead, mirrors are used to reflect the rays and heat up a body of water, which produces steam to power turbines in an electrical power plant. Recently, a huge power plant of this type was open in Morocco, capable of producing electrical energy by depositing heat in tanks full of salt, which then power the turbines for 8 hours during night time.

The advantage of solar and thermal comes from this bridging of the night time without the presence of batteries. But, the problem is that this alternative remains possible in places like Morocco, where temperatures are constantly high.

For a BitCoin mine, this would mean either a lot of cooling infrastructure (which would consume power and negate any effects of savings made with solar energy) or creation of underground facilities with more stable temperature (which would increase the initial cost of the venture substantially).

These facts point to the idea that solar power is still an unreliable or an unprofitable method of generating electrical energy for a BTC mining operation.

In many ways, wind power is a lot more stable source than solar when talking about the current technological levels. A wind farm is built on a space where wind presence is more or less constant over a protracted period of time (usually over 2 years in measurements).

Additionally, the wind does not die down over some periods, like Sun does, and wind presence spans the entire globe, including regions away from the equator (which is a problem for solar). This means that a wind farm is a constant source of electrical power and a BTC mine could benefit from one immensely.

But, here the problem lies in an incredibly steep initial investment. An effective wind farm includes pylons which are regularly over 60 or 70 meters high while the generators themselves are exceeding heavy. Even a small wind farm needs a couple of these to produce power and all of this equals a staggering investment.

So far, it seems that not many BitCoin mines or mining pools have dared to invest their funds in this type of a project. An additional issue is that any form of maintenance of a wind farm facility is exceedingly complicated and more often than not demands an in-house team.

While wind farms look like a plug and play solution, a lot of effort has to go into their proper optimal functioning and this shows in the maintenance bill. In many ways, even though it has a different set of advantages and disadvantages than solar, wind renewable energy is also a dubious investment when it comes to generating energy for a BitCoin mine.

It is clear why so many mines simply ignored the idea of using green energy to power their computing power. It is complicated to operate, costly and demands an intricate setup, while it also makes sense that it is located near the mining facilities. This makes the choice of locations very small when all half-solutions (like building mines in Sahara for the sunshine or on top of a mountain for wind) are discarded.

There is a huge incentive, both financial and environmental to switch mines to a renewable energy source, but so far, it simply fails to make sense in terms of short-term budgets. Until the technology for producing energy becomes more affordable and stable in terms of output, it is almost certain that BitCoin mining operations will continue to choose traditional power suppliers over any renewable source.

For end users of BTC, who desire to bet online using this digital currency, enjoy E-Sports, do some shopping or send funds, the BitCoin experience remains the same. When the financial aspect of a decision to go green provides the miners with a clear profit bump, it is certain that many will jump at the opportunity to plug their mines into the renewable sources.