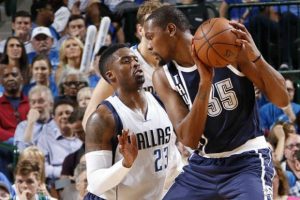 Oklahoma City Thunder will be aiming to build on a routine 131-102 win over Dallas Mavericks when the two teams take on each other at American Airlines Center on Saturday evening. Thunder are regarded as hot favourites to win the game 4, but Mavs should not be written off just yet.

Dallas Mavericks did remarkably well to upset Oklahoma City Thunder in game 2, but it has to be noted that Kevin Durant missed a number of open shots during the game and that was the main reason why Mavs recorded a hard-fought 85-84 victory over Thunder. Nonetheless, Rick Carlisle’s men were not capable of preventing Durant from scoring less than 30 points in game two and the team’s defensive performance in game 3 was awful (102-131). Dallas face a must-win situation in Saturday’s match against Oklahoma and key players Dirk Nowitzki and Wesley Matthews will have to be at their sharpest this time out if Mavs are to tie up series 2-2. You should have in mind that Mavericks are after their 24th home win of the season.

David Lee has overcome his injury and he returned to contention in game 3. Chandler Parsons remains in the recovery room, but coach Rick Carlisle has no other fresh injury worries ahead of Saturday’s match.

By beating Dallas Mavericks at American Airlines Center 131-102 Oklahoma City Thunder moved one step closer to booking their place in the NBA Western Conference semis. Kevin Durant failed to impress in game 2, with the team’s key player shooting 7 of 33, but he was at the top of his game on Thursday evening and, as a result, Thunder took the lead in the tie against Mavs. Oklahoma are undisputedly superior to Dallas, but they will have to prove their worth on the court on Saturday. The other star player Russell Westbrook scored 26 points in game 3, while adding 15 assists and, no doubt, Mavericks should find it hard to contain the 27-year-old point guard. Oklahoma aim to get their job done in the tie against Dallas as soon as possible and it remains to be seen if they are capable of recording their 25th away win of the season.

Kyle Singler did not enter the court in the 131-102 win over Dallas (coach decision), but he could play some part in game 4. Coach Billy Donovan can count on all of his key players for the match.

Oklahoma City Thunder proved their worth in game 3 and seeing that Kevin Durant has found his scoring touch, I believe that there is a big value in betting on Billy Donovan’s troops. Dallas suffered seven defeats in last eight meetings with Oklahoma and I do not believe that they are capable of recording yet another shocking win over Thunder.