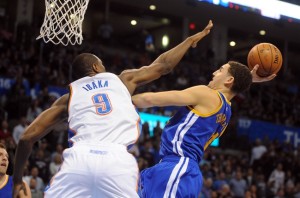 Following back-to-back wins over Los Angeles Clippers and San Antonio Spurs, Golden State Warriors take on Denver Nuggets at Pepsi Center. Michael Malone’s men made a flying start to the season as well, meaning that a real basketball festival is on the cards.

Denver Nuggets have been producing fine performances in NBA of late. Michael Malone’s troops recorded four wins in previous five games and, as a result, they sit in the play-offs berth in the Western Conference ahead of the visit of Golden State Warriors. Denver are eyeing their third consecutive win at home and they will be looking to build on back-to-back triumphs over Miami Heat and Toronto Raptors when they take on the title holders at their Pepsi Center. Serbian international Nikola Jokic continues where he left last season and “the Joker” will be the man to watch in the home team. Jokic has 16.4 points per game, but Paul Millsap, who scored 27 points in the 95-94 victory over Miami Heat is likely to play an important role in Michael Malone’s team as well.

Spanish player Juan Hernangomez misses the match through illness, but coach Michael Malone has no injury worries ahead of Saturday’s clash against Golden State Warriors.

KD is the key

Golden State Warriors quickly bounced back from a shocking 115-107 loss to Detroit Pistons, with the team beating two star-studded teams Los Angeles Clippers and San Antonio Spurs in previous two games in NBA. The reigning champions aim to extend their winning run to three games, but Saturday’s clash against in-form Denver will be anything but a walk in the park for them. Steve Kerr’s men had 30 assists and 11 steals in the 112-92 victory over San Antonio, but you should bear in mind that Spurs were without key players Ton Parker and Kawhi Leonard in Thursday’s showdown at AT&T Center. Kevin Durant has been in a splendid form of late and all eyes will be on the former Oklahoma City Thunder ace when Warriors take on Nuggets on Saturday evening. KD has been averaging 25.2 points this season and he should be the key to Golden State’s success in the clash against Denver. Stephen Curry impressed in the 141-113 triumph over Los Angeles Clippers and he is likely to make life difficult for Nuggets as well.

Steve Kerr has a full roster to choose from and he is unlikely to make changes to the starting line-up: Curry, Thompson, Durant, Green, Pachulia.

As previously mentioned, an enteretaing encounter is on the horizon. Both teams have found their form of late and we believe that fans will see a high-scoring affair at Pepsi Center. In their last meeting in Denver Nuggets recorded a 132-110 victory over Golden State Warriors and, taking everything into account, there is a big value in betting on over 229.5 points.