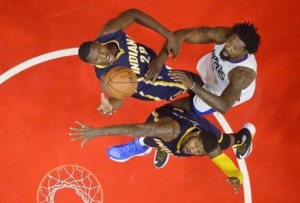 Denver Nuggets and Los Angeles Clippers, the two teams who are fighting hard to book their place in the NBA play-offs, face each other at Pepsi Center on Tuesday evening. Nuggets, who were beaten by Clippers at Staples Center earlier in 2018, are hungry for revenge, but beating Doc Rivers’ troops is easier said than done.

Denver Nuggets have been producing fine performances in the 2017/2018 NBA season, but they have yet to secure a top-eight finish. Nuggets occupy 8th position in the Western Conference ahead of the visit of Los Angeles Clippers, but their next rivals are breathing down their neck. Following four consecutive wins Michael Malone’s men suffered a 119-114 loss to Houston Rockets at the weekend, but Serbian rising star Nikola Jokic produced yet another thrilling display. “The Joker” has become a triple-double master and all eyes will be on him when Nuggets face Clippers on Tuesday. It is well known that Denver have turned their Pepsi Center into a real fortress, with the team eyeing their 25th home win of the season. However, the game against Doc Rivers’ charges will be anything but a walk in the park for the hosts.

Paul Millsap is questionable for Tuesday’s clash, but duo Torrey Craig – Kenneth Faried should be fit to face Los Angeles Clippers. Tyler Lydon is definitely out of contention with an ankle problem.

Los Angeles Clippers saw key player Chris Paul join Houston Rockets in the summer, but everybody expected that Milos Teodosic would be an adequate replacement for CP3. Nonetheless, the former CSKA man has been averaging only 9.2 points this term and, as a result, he lost his place in the starting line-up. Doc Rivers’ troops have been having their ups and downs in the NBA this season, with the team sitting in ninth position in the Western Conference ahead of the trip to Denver. Anyhow, the fact that they recorded three wins in previous four league games is giving fans a reason for optimism ahead of the Nuggets clash. Lou Williams led Clippers to a 128-117 win over Phoenix Suns at the weekend, meaning that Nuggets should have the former Los Angeles Lakers star at bay. You should bear in mind that Doc Rivers’ men are after their 16th away win of the season.

Danilo Gallinari is a major doubt and he will be assessed ahead of the game, whilst Avery Bradley, Jawun Evans and Patrick Beverley remain in the recovery room.

There will be fireworks when Denver Nuggets and Los Angeles Clippers face each other at Pepsi Center as this is a battle for play-offs. Clippers have been in a fine form of late, but considering that Nuggets are tough to beat at home, I am tempted to put my money on “The Joker” and Co.