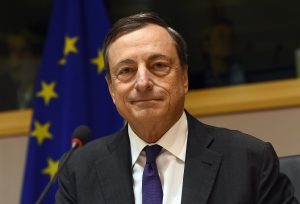 The position of digital currencies is becoming more and more complicated inside of the European Union. The EU, which is one of the most important and wealthiest political and economic entities in the world, is apparently struggling to define its stance on the crypto market today and of the future. Over the last few years, this was shown to be true on numerous occasions, including a very public and widely known difference between the official EU approach (and at least a semblance of this approach) and its individual member states, primarily Malta.

Now, the divide is apparently growing even bigger with the recent statement of Mario Draghi, the ECB (European Central Bank) which ended up being strangely dismissive in a way that looks like it was not intended. But, as with most things related to the EU global position on an important topic, this provides a window into a huge system that is running outside of what would be called optimal parameters.

Draghi, in his role at the ECB, recently stated that the cryptocurrencies are not, in his words, mature enough to warrant regulatory activities from the EU. In a press conference, he said that the situation with digital currency is similar to many other moments with something new – people come with great expectation to this phenomena, but it also includes great uncertainty.

As he stated, the biggest representative of the market, bitcoin, but other cryptocurrencies as well are simply not developed enough to become a regulatory topic. Soon at the same press conference, the topic switched to Draghi’s thoughts on the potential of digital cryptocurrencies. He stated that one of the most important lessons of the modern financial market is to cherish the benefits brought about by FinTech but to be mindful of potential risks.

In this follow-up, Draghi managed to say very little of any reasonable substance, being that the double-edged sword talk about technology can be applied to anything ever invented. In this regard, digital currencies are no different and there are no developers or traders who would not provide the very same advice to the public.

Like always, the problem with Draghi’s message lies in the drastic and potentially catastrophic lack of understanding when it comes to digital currencies (like the issue of when do they “mature”). To make things even worse, this lack of knowledge comes directly from one of the most prominent institutions in the EU.

This statement is not the first one made by the ECB official regarding the digital currency domain and its position inside of the EU. Last month, Draghi made a statement to the European Parliament’s Committee on Economic and Monetary Affairs where he revealed that ECB does not have the jurisdiction to ban or regulate cryptocurrencies. This statement, while it boils down to the same “ECB will not touch digital currencies” is a bit of a conundrum.

Is the ECB without the legal means to impact the use of digital currencies in the EU, or is it simply choosing to stay out of any regulatory strategies because it deems the same phenomena unworthy of their attention? It looks like neither Draghi nor the rest of the EU financial regulators have a clear understanding of this problem.

In spite of the slightly contradictory meaning behind the statements, the general message these provide is clearly negative. The choice of those who receive it is to decide is this because digital currencies are not advanced enough to be relevant or because they are potentially problematic for the rest of the system. Either way, the EU is ready and willing to paint the cryptocurrency field as something that would definitely not be useful to the citizens of the block.

With this concept, officials apparently do not have any problem with the fact that many EU citizens possess digital currencies and use it to purchase goods and service, gain access to loans outside of the banking system, bet using BTC and many other things.

At the same time, while the ECB is willing to wait to pass its judgment about the digital currencies, IMF is not. Recently, Christine Lagarde, the IMF’s managing director stated that cryptocurrencies have to be taken seriously because they have a potential to create massive disruptions.

Here as well, the negative overtones are more than readable. The concept of any kind of disruption is not something a trader in any corner of the world would desire to have. In the financial domain, disruption often means something dangerous and unpredictable.

While many traders desire to see a level of volatility that can be exploited, the same does not apply to huge disruptions, which regularly end up hurting everyone in the financial system. This is why even using the term disruption, unlike in general tech field, shows a willingness to present the situation as dangerous setup.

It is difficult to argue the point that the EU governance systems are entering an ever-deeper state of crisis. While this crisis might not be a burning issue at this point, many aspects of EU operations seem to be very cumbersome and ineffective.

The political turmoil in Spain related to the Catalan independence vote is a good example. Even though the problems are very relevant to the EU and are taking place on its territory, the EU official stated that they will not enter the crisis in any shape or form.

Here as well, the decision is a combination of explanation that point to Spain’s sovereignty but also come with the excuses about the lack of direct action any EU institution can undertake. This murky denial of jurisdiction is all that the Catalan region can attain from the EU and for many, this is a huge problem.

As of now, it looks like the same small level of support is not something that the EU officials can provide to the digital currency domain.