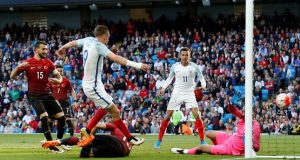 England begin their preparations for the 2018 FIFA World Cup with a friendly game against their old rivals Germany. Wembley Stadium will host Friday’s showdown and a lively contest is on the cards.

England failed to impress at EURO 2016, with the team suffering a shocking elimination to Iceland in the knockout stages of the tournament. The Three Lions are eager to make amends for the unsuccessful campaign and they certainly have big ambitions for the 2018 FIFA World Cup finals. Gareth Southgate’s men were producing splendid performances in the qualifiers and it has to emphasize that they are on a four-game winning run ahead of Friday’s friendly against Germany. Tottenham Hotspur Dele Alli misses the Germany clash with injury and, to make things even worse for England fans, his teammates Harry Kane and Harry Winks pulled out of the squad as well. Marcus Rashford, though, is enjoying a very successful season and the Manchester United attacker will be the man to watch in the home team. The Three Lions were beaten by Joachim Low’s charges in their last meeting on the international stage, meaning that the hosts are hungry for revenge.

Aforementioned trio Kane, Alli and Winks miss the Germany with injury, whilst the likes of Jordan Henderson, Raheem Sterling and Fabian Delph have withdrawn from the England squad as well.

As expected, Germany booked their place at the 2018 FIFA World Cup finals without any difficulties, with the team finishing the qualifying process in top position in Group C, 11 points clear of second-placed Northern Ireland. Die Mannschaft are eyeing their eighth consecutive win in all competitions and seeing that England head into Friday’s friendly with a severely-weakened squad, Joachim Low’s men are seen as hot favourites to win their penultimate game of the year. Joachim Low has a number of top-class players to choose from and regardless of which players will be deployed in the starting line-up against England, away win should be considered. Real Madrid ace Toni Kross is likely to start the match, whilst Mesut Ozil should keep his place in the starting line-up despite struggling to find his best form in the first half of the 2017/2018 Premier League campaign. Germany defeated England (1-0) in a friendly at Signal-Iduna-Park earlier this year and they surely want to repeat the success.

Mario Gotze and Ilkay Gundogan have been recalled, whilst goalkeeper Manuel Neuer remains in the recovery room. Marcel Halstenberg could make his Germany debut against England.

As previously mentioned, England were producing scintillating displays in the 2018 World Cup qualifiers, but considering that coach Gareth Southgate has a number of injury concerns ahead of Friday’s game against Germany, I am tempted to put my money on the visitors, who have been scoring goals for fun in 2017.