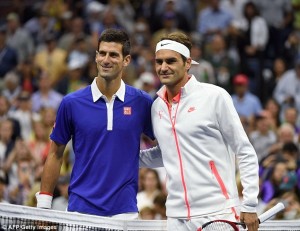 Novak Djokovic will be looking to move one step closer to winning his fourth Wimbledon trophy when he takes the court against Ernest Gulbis, who is eager to claim yet another major scalp at the grass-court tournament after rolling over Juan Martin Del Potro on Court No. 3 on Thursday.

Ernest Gulbis, whose lifestyle has always been criticized, is enjoying a very successful tournament at the All England Club. The Latvian tennis player has been producing outstanding performances at the 2017 Wimbledon and, despite the fact that he is sits in 589th position in the ATP rankings, he did well to crush the likes of Estrella and Del Potro in first two rounds of the major tournament. Gulbis produced a splendid display in the 3-0 (6-4, 6-4, 7-6) victory over the Argentine superstar and it has to be noted that he dropped only 11 points on his first serve and struck 25 aces. The talented Latvian is high on confidence ahead of Saturday’s clash against Novak Djokovic, but beating the former World No. 1 on grass is easier said than done. You should bear in mind that Gulbis is after his second win over the Serbian ace.

Novak Djokovic did not spend too much time on court in his opener against Martin Klizan as the Slovak player was forced to retire due to injury. The Serbian superstar then rolled over Adam Pavlasek of Czech Republic in round 2, but he will have a much bigger fish to fry in Saturday’s match against high-flying Latvian Ernest Gulbis. Nole failed to win Wimbledon last year and, no doubt, he is eager to regain the trophy. However, seeing that the former World No. 1 has been struggling to find his best form ever since he won the 2016 Roland Garros, I would not be surprised if he fails to win the 2017 Wimbledon title. Anyhow, Novak Djokovic is seen as hot favourite on paper to win Saturday’s showdown against Ernest Gulbis and he is widely expected to make it to the fourth round of the major tournament. Nole is after his fifth consecutive win over Ernest Gulbis, but coach Andre Agassi should warn him against complacency. The Serbian player is eyeing his third trophy of the season (Doha, Eastbourne).

Novak Djokovic is not enjoying a season to remember, but he is definitely capable of going all the way at the 2017 Wimbledon. The Serbian ace is likely to beat tennis’ bad boy Ernest Gulbis on Saturday, but seeing that the Latvian has been serving almost perfectly at the third major tournament of the year, I would not be surprised if the underdog wins one set in round 3. You should know that Ernest Gulbis won a set in each of previous two meetings with Novak Djokovic.