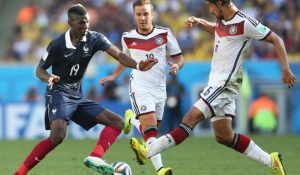 Euro 2016 hosts France will be looking to build on a 5-2 win over Iceland when they take on Germany in the semi-finals of the showpiece tournament. Joachim Low’s men head into the match with a severely-weakened squad, but they should not be underestimated.

Germany hit by injuries and suspensions

Germany impressed in the Euro 2016 group stages. Die Manschaft outplayed the likes of Northern Ireland and Ukraine in Group C, while playing out a goalless draw with Poland. The Germans clinched top position in their group and, as expected, the World Cup title holders defeated Slovakia (3-0) in the last 16. Joachim Low’s men then eliminated Italy on penalties to set up a meeting with France in the Euro 2016 semis. Germany made it to the semis of the tournament in France, but it has to be noted that two first-team regulars Mario Gomez and Sami Khedira both picked up injuries in the clash against Italy and many people believe that the duo will be sorely missed in the clash against France. Key defender Mats Hummels is out of contention as well and that is yet another reason why I am not tempted to put my money on the Germans this time out.

Sami Khedira and Mario Gomez are both out of contention through injury, while Mats Hummels is sidelined through suspension. Bastian Schweinsteiger is rated doubtful for the France game.

Many people expected that France would experience all sorts of problems against Iceland, but les Tricolores did well to crush Lars Lagerback’s troops in the Euro 2016 quarter-finals (5-2). Didier Deschamps’ men hammered the Icelanders at Stade de France, with Antoine Griezmann extending his goal-scoring run. The Atletico Madrid attacker is in the form of his life and all eyes will be on him when France take on Germany in the Euro 2016 semis. Les Tricolores play in front of home fans at the 2016 European Championship and it is no surprise they are regarded as favourites to make it to the final of the tournament. France won their last Euro trophy back in 2000 and you should bear in mind that they are after their third ever European Championship title. Paul Pogba has been in a fine form at the tournament in France and the Juventus superstar is likely to prove a handful for the opposition back line.

Adil Rami and N’Golo Kante return to the starting line-up after they missed the Iceland game through suspension, meaning that Didier Deschamps will have a full squad to choose from this time out.

France impressed in the 5-2 victory over Iceland and seeing that Didier Deschamps has a full squad to choose from ahead of the Germany clash, I am tempted to put my money on the hosts this time out. Joachim Low has a number of selection worries ahead of the Euro 2016 semis and, taking everything into account, the time has come for the Germans to start packing their bags.