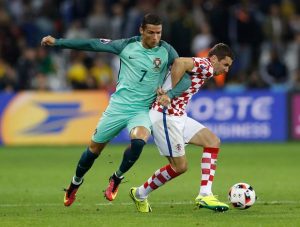 Having crushed Belgium in the quarter-finals, Wales will be looking to claim yet another major scalp at the 2016 European Championship finals when they take on Portugal at Parc Olympique Lyonnais on Wednesday evening.

Portugal have yet to record a win in the regular time at the Euro 2016 finals, but they somehow made it to the semis. A Selecao set up a meeting with Wales in the Euro 2016 semis by beating Poland on penalties and they will have to produce a much better performance in Wednesday’s game against Chris Coleman’s troops if they are to make it to the final. Cristiano Ronaldo has been playing below expectations at the tournament in France, but, no doubt, he could pose a big threat for the opposition back line in the Parc Olympique Lyonnais clash. The Real Madrid ace is likely to be deployed up front, alongside Nani, but Fernando Santos should rely on his rock-solid defence in Wednesday’s clash. Pepe has been impressive at the Euro 2016 finals so far and I would not be surprised if A Selecao manage to keep a clean sheet in the semis. Portugal are after their first ever European Championship title and, no doubt, Fernando Santos’ troops will give their all to turn their long-lasting dream into reality.

Midfielder William Carvalho misses the match through suspension, but coach Fernando Santos has no fresh injury worries ahead of the match. Joao Moutinho is likely to be recalled to the starting line-up.

Wales, on the other hand, made it to the European Championship semis for the first time ever and they did it in style. The Dragons came from behind to outclass star-studded Belgium in the quarter-finals, but you should bear in mind that the Belgians were without their key defenders in the Stade Pierre-Mauroy clash. Chris Coleman is doing a great job with the Welsh national team, but he can’t count on two first-team regulars for the Euro 2016 semis. Ben Davies and Aaron Ramsey will be sorely missed in Wednesday’s clash against Portugal and that is the main reason why away win should not be considered this time out. Gareth Bale failed to score in the 3-1 win over Belgium, but he has been playing a key role in Chris Coleman’s team at the showpiece tournament in France and he is likely to prove a handful for the opposition back line. Anyhow, Wales face an uphill task in the game against Portugal and I am not tempted to put my money on the underdogs.

Aaron Ramsey and Ben Davies are both banned for the clash against Portugal, but key defender Ashley Williams is fit and he should keep his place in the starting line-up. Andy King is widely expected to start this time out.

Portugal do not seem to be at the top of their game at the moment, but Cristiano Ronaldo is certainly capable of helping A Selecao book their place in the Euro 2016 final. Wales will be without two important midfielders in Wednesday’s game and, taking everything into account, Fernando Santos’ should make it to the final of the tournament in France.