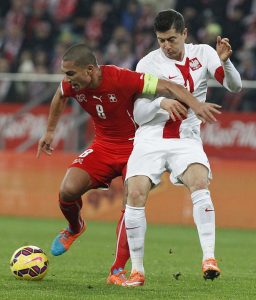 Switzerland and Poland face each other in the Euro 2016 last 16 stage. The two teams meet for the first time ever at the major tournament and it remains to be seen who will make it to the knockout stages.

Rossocrociati proved their worth against France

As expected, Switzerland kicked off their Euro 2016 campaign with a triumph over Albania. The Rossocrociati then shared the spoils with Romania in their second group game and thanks to a goalless draw with France the team booked their place in the knockout stages of the showpiece tournament in France. Vladimir Petkovic’s troops have been impressive at the back in the process, but it has to be noted that les Tricolores hit a woodwork twice in the draw against the Swiss. Switzerland are high on confidence ahead of the Poland game, but beating Robert Lewandowski and Co. is easier said than done. Xherdan Shaqiri has been playing below expectations at the tournament in France, but the opposition defenders should have him at bay. Breel-Donald Embolo failed to impress in the goalless draw with France and there is every chance Haris Seferovic will lead the line for the Rossocrociati against Poland.

Admir Mehmedi came as a substitute in the goalless draw against France and he is likely to start this time out. Aforementioned attacker Haris Seferovic returns to the starting line-up as well. Coach Vladimir Petkovic has no fresh injury worries ahead of the match.

Poland have been impressive at the back at the tournament in France as well. The Poles recorded hard-fought 1-0 wins over Northern Ireland and Ukraine, while holding star-studded Germany to a goalless draw in their second group game. Adam Nawalka’s men are likely to rely on their rock-solid defence in Saturday’s clash against Switzerland and, on the other hand, Bayern Munich ace Robert Lewandowski is likely to prove a handful for the opposition back line. Poland made it to the European Championship knockout stages for the first time ever and no doubt they will leave their hearts on the field in the Stade Geoffroy-Guichard clash. Lewandowski has yet to open his goal-scoring account at the Euro 2016 finals, but he is playing an important role in Adam Nawalka’s team and he is definitely capable of making life difficult for the Rossocrociati. Anyhow, the team’s main goal is to keep their fourth consecutive clean sheet at the tournament in France.

Both Switzerland and Poland have been producing fine performances at the Euro 2016 finals and the two teams seem to be evenly matched at the moment. Both sides are likely to adopt a cautious approach in Saturday’s match and considering that the two teams have been impressive at the back so far, I am positive that we will see a low-scoring affair in Saint Etienne.