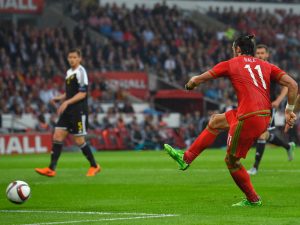 A place in the Euro 2016 semis will be at stake when Wales and Belgium take on each other at Stade Pierre-Mauroy on Friday evening. The Red Devils are regarded as favourites to make it to the semi-finals, but the Dragons should not be underestimated.

Can anyone stop Gareth Bale?

Wales impressed in the Euro 2016 qualifiers and even though many people expected that the Dragons would struggle at the showpiece tournament in France, they have been producing terrific performances at the European Championship finals so far. Wales defeated the likes of Slovakia and Russia in the group stages and they were more than unfortunate not to grab something from the game against England. Daniel Sturridge’s late goal spoiled Wales’ party in Lens, but Chris Coleman’s troops eventually booked their place in the last 16. The Dragons failed to impress against Northern Ireland, but they somehow eliminated the Green and White Army in the Euro 2016 knockout stages and it has to be noted that Michael O’Neill’s men scored an own goal following Gareth Bale’s cross. The Real Madrid ace has been in a thrilling form at the tournament in France and all eyes will be on him when Wales take on Belgium on Friday night.

Joe Ledley is fit and he is likely to start the match, but key defender Ashley Williams picked up an injury against Belgium and it remains to be seen if he will recover in time to face the Red Devils.

Belgium kicked off their Euro 2016 campaign with a 2-0 loss to Italy, but the Red Devils quickly bounced back from the defeat. Marc Wilmots’ men outclassed Republic of Ireland in their second group game and thanks to a 1-0 win over Sweden the team clinched second place in Group E. As expected, the Belgians hammered Hungary in the last 16, with Eden Hazard producing a thrilling performance in the Stadium Municipal clash. The Chelsea ace seems to be at the top of his game at the moment and, no doubt, the opposition defenders are going to have their work cut out for them when facing the former Lille man. Romelu Lukaku failed to score in the 4-0 win over Hungary, but the Everton striker is likely to lead the attack for the Red Devils against Wales. Belgium failed to beat the Dragons in the Euro 2016 qualifiers and it remains to be seen if they are capable of putting an end to the negative trend.

Barcelona defender Thomas Vermaelen misses the match through suspension, while Moussa Dembele has overcome his injury and he is pushing for a start. Yannick Carrasco could replace Dries Mertens in the starting XI.

As I have already mentioned, Belgium failed to defeat Wales in the Euro 2016 qualifiers. The Dragons have been impressive at the back at the tournament in France and they are eager to keep their third consecutive clean sheet. Considering that Marc Wilmots’ men are likely to adopt a cautious approach in Friday’s clash, I believe that there is a big value in betting on under 2.5 goals.