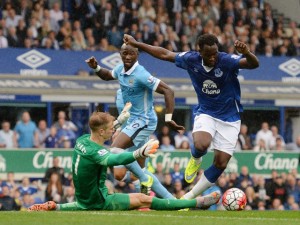 Following a come-from-behind win at Watford, Manchester City will be looking to move one step closer to clinching the Capital One Cup trophy with a victory over Everton at Goodison Park. The Toffees have been having their ups and downs of late, but they are certainly capable of making life difficult for Manuel Pellegrini’s troops.

Toffees struggling at the back

Everton did remarkably well to beat Newcastle United on Boxing Day. Former Man Utd midfielder Tom Cleverley scored the winner in the dying minutes of the game, but the Toffees were more than unfortunate not to grab something from the final game of the year against Stoke City. The Potters scored two late goals in the Goodison Park clash and eventually spoiled Everton’s festive party. Roberto Martinez’s men look impressive in front of goal, but they have been struggling at the back of late and it has to be noted that they failed to keep a clean sheet in previous four home games in the Premier League, which is probably the main reason why they sit outside the Champions League positions. Both Romelu Lukaku and Ross Barkley have been in a thrilling form this season and the opposition defenders are likely to have their work cut out for them when facing the duo in Wednesday’s Capital One Cup game. Lukaku and Barkley have netted 21 goals in total this season.

Tyias Browning, Tony Hibbert and James McCarthy all miss the visit of Manchester City with injury. Steven Pienaar has yet to overcome his injury and he is yet another absentee in the home team.

One win in last six away games

Manchester City are a team with two faces. The Citizens have been impressive at their Etihad Stadium this season, but they have been struggling on the travels in the 2015/2016 campaign. Manuel Pellegrini’s men did defeat Watford at Vicarage Road Stadium at the weekend to stay close to Premier League leaders Arsenal, but you should bear in mind that the star-studded team have recorded only one win in previous six away games in all competitions. The good news for the fans is that key attacker Kun Aguero put an end to his goalless run and no doubt the Argentine forward will play an important role in Manuel Pellegrini’s team in days to come. Manchester City have eliminated the likes of Sunderland, Crystal Palace and Hull City in the League Cup, with the team scoring no less than 13 goals in the process. It has to be noted that the Citizens won their last Capital One Cup trophy two seasons ago when they defeated Sunderland in the title game (3-1).

Samir Nasri and Vincent Kompany remain sidelined with injury, but Pablo Zabaleta could play some part against Everton after recovering from his long-term injury. Manuel Pellegrini has no other fresh injury worries ahead of the trip to Liverpool.

Everton have been scoring goals for fun of late and given Man City’s attacking potential, a lively contest is on the cards this time out. On the other hand, both sides have been struggling at the back this season and, taking everything into account, there is every chance we will see a high-scoring affair at Goodison Park in the Capital One Cup semi-final, first leg.