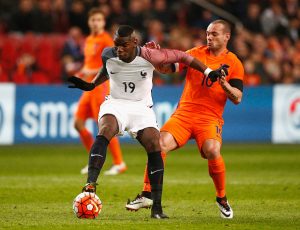 France will be aiming to regain top position in Group A with a win over Netherlands at their Stade de France. The Oranje rolled over Luxembourg in their last qualifier, but les Tricolores are likely to pose a much bigger threat for Dick Advocaat’s troops than their previous rivals.

France did not kick off their 2018 World Cup campaign in style, with the team dropping two points in a goalless draw with Belarus. However, les Tricolores then recorded four consecutive wins in their qualifying group before suffering a 2-1 loss to Sweden at Friends Arena. Didier Deschamps’ charges are eager to bounce back from the defeat and they are seen as favourites to win Thursday’s clash against Netherlands. It is well known that France are a real force to be reckoned with at home and they are determined to keep their 100% on home soil intact. Paul Pogba has been in a fine form at the start of the new Premier League season and he is likely to pose a big threat for the opposition defenders. As before, Atletico Madrid ace Antoine Griezmann should lead the line for the hosts against Netherlands.

First-team regulars Dimitri Payet and Raphael Varane are both sidelined with injury, whilst the likes of Ousmane Dembele, Kevin Gameiro and Tiemoue Bakayoko have been left out of the squad. Coach Didier Deschamps is likely to stick to the 4-3-3 formation.

Netherlands missed out on a place at the 2016 European Championship finals and, no doubt, they are desperate to qualify for the next year’s World Cup in Russia. The Oranje, though, have been having their ups and downs in their qualifying group and, as a result, they sit in third place in the standings ahead of the trip to France. Dick Advocaat’s men hammered Luxembourg 5-0 in June, but the fact that they suffered a 2-0 loss to Bulgaria in their last away game in the process is not giving fans a reason for optimism ahead of Thursday’s qualifier against France. Arjen Robben has overcome his injury and all eyes will be on the Bayern Munich winger when the two teams face each other in the “City of Lights”. Anyhow, Netherlands face an uphill task in Thursday’s showdown and the visitors would be more than happy with one point from the match.

The likes of Kenny Tete, Davy Klaassen and Nathan Ake miss the game with injury, whilst Timothy Fosu-Mensah has received his first ever call-up. Experienced attacker Robin van Persie is likely to start from the bench.

Over the years France have established themselves as one of the best national football teams in the world and seeing that they have been impressive at home ground in the 2018 World Cup qualifiers, I am tempted to put my money on Didier Deschamp’s troops. Netherlands are no longer considered an international football powerhouse and, taking everything into account, les Tricolores are likely to pick up all three points from Thursday’s clash.